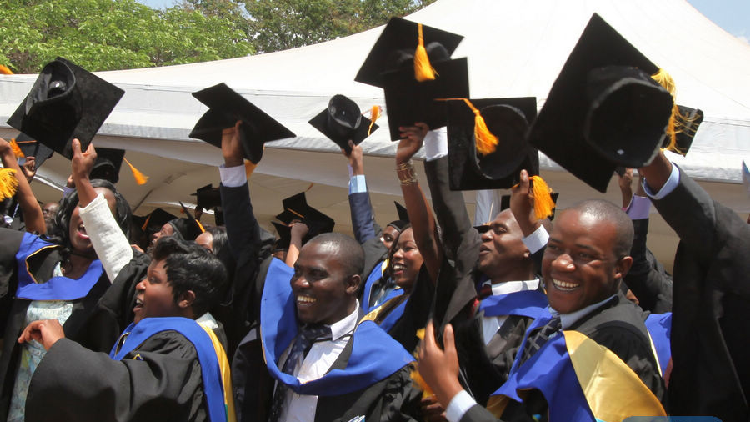 Eleven outstanding students from the University of Zimbabwe were awarded scholarships under the China-Zimbabwe Friendship Scholarship on Saturday to cover part of their tuition fees.

The inaugural ceremony of the scholarship program, which was hosted by the Confucius Institute at the University of Zimbabwe (CIUZ), was facilitated by the China-Africa Economic and Cultural Research and Exchange Center (CAECERC) with the support from the Chinese Embassy in Zimbabwe.

The scholarship recipients pocketed a cash prize of US $ 300 each.

In addition, the winners of an essay competition organized by the Chinese Embassy and CIUZ on the theme “My story with China” also left with the latest smartphones and laptops.

Coming from all walks of life, the contest participants wrote down their impressions of China and their experiences of learning the Chinese language.

After wowing the judges with her essay in which she recounted her first-hand experience with China during a month-long summer program in Beijing, Rufaro Lucetta Makiwa won the top prize for a Lenovo laptop .

Makiwa, a major in English and Chinese at the University of Zimbabwe, said the increased engagement between China and Africa motivated her to study Chinese.

“The bilateral relations between China and Zimbabwe have motivated me to see that we are now working together, so I just thought that if I do this program, I will have a lot of opportunities, I will not be stuck,” she declared.

Fellow and second prize winner in the Essay Writing Competition, Natasha Machaya, shared her experience of learning Chinese characters and the mechanisms she used to master them despite their complexity.

Victor Mugari, Acting Dean of the Faculty of Arts and Humanities at the University of Zimbabwe, expressed his gratitude to the Chinese community for their support for local education initiatives.

“For our students, having the chance to have the necessary resources to continue their studies is something very important to us, we want our young people to be empowered to pursue what they do best,” he said. .

Steve Zhao, director of CAECERC, said the scholarship program is part of the Chinese community’s initiatives to give back to society.

The winners of the competition also benefited from scholarships offered by Dreamstar with the support of the Chinese Embassy.

China has been at the forefront of promoting education in Zimbabwe, with the Asian country providing over 100 scholarships to Zimbabwean students annually through the Chinese Government Scholarship, Scholarship from the Confucius Institute, various provincial government scholarships as well as scholarships funded by Chinese companies in Zimbabwe.

Fight against vaccine hesitation through art, not shame