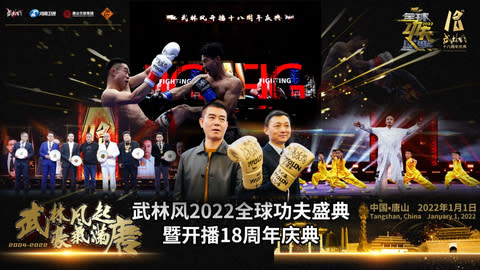 TANGSHAN, China, January 17, 2022–(BUSINESS WIRE)–“WLF Global Kung Fu Gala and 18th Anniversary Celebration” successfully held in Tangshan, Hebei, China. Since its inception in 2012, the WLF Global Kung Fu Gala is now in its 10th year. It is the most standard fighting event in China and the best stand-up fighting presentation in the world.

Since the launch of WLF on January 3, 2004, WLF has traveled more than 3 million kilometers in 36 countries and regions on five continents. We’ve hosted 527 major tournaments, aired over 900 episodes, and created mixed martial arts and youth leagues. More than 10,000 Chinese and foreign athletes have graced the martial arts ring, making it one of the oldest and most influential martial arts fighting events in the world.

On the same day, the 4th World Combat “Golden Boxing Award” ceremony was fully opened, and all the awards were announced after the grand red carpet ceremony. The celebration of the 18th anniversary of martial arts was one of the important events of the evening. The three WLF stars, Wang Hongxiang, Yilong and Fang Bian, who enjoy high reputations in the Chinese fighting industry, performed on stage. Singers Ye Shirong of Beyond, GAI Zhou Yan and Hou Jian teamed up with Ling Yun, the heiress of Emei martial arts, and Chen Bing, the heiress of the intangible cultural heritage of Tai Chi, to offer the public a feverish night !

With the raging global Covid-19, Henan TV WLF has been able to cooperate and join forces with Tangshan Culture and Tourism Group thanks to China’s active and effective anti-epidemic measures. In this competition, we succeeded in the perfect integration of sport, cultural activities and tourism!