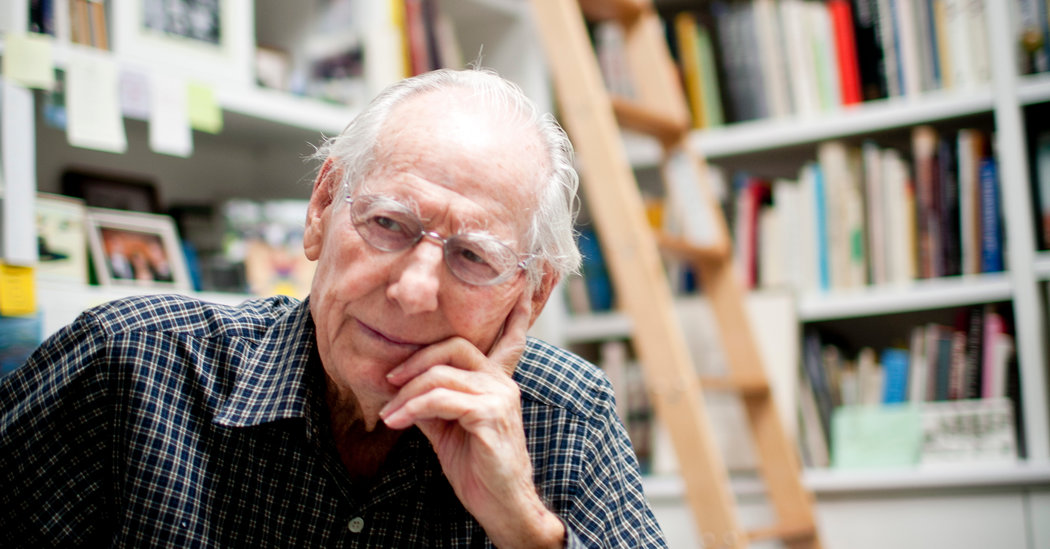 Wayne Thiebaud, the Californian painter whose lush, dreamlike landscapes and luminous images of hot dogs, deli counters, marching band majorettes and other charmed relics of mid-century America were intricate meditations on the life and painting, and represented one of the most touching and individual variations on twentieth-century Pop Art, died Saturday at his home in Sacramento. He was 101 years old.

His death was confirmed by his gallery, Acquavella.

To tell the truth, M. Thiebaud was not really a Pop painter. Critics have sometimes tried to classify him as an or as an illustrator. In fact, like many historical artists he admired, he was a virtuoso of the everyday and its deep and subtle symbolism.

In person, he was an Old West classic, a slim man with Gary Cooperish charm and dry humor – soft-spoken, modest, composed, self-assured. Often bathed in the Pacific sun, M. Thiebaud’s art seemed at first radiant and simple as day. But on closer inspection, his images of idealized pies, tangles of highway spaghetti, and gumball machines lined with blue halos needed unboxing. A rustle of unexpected sadness has sometimes crept into the paintings after this first leap of joy – a sentimental longing for a bygone era or a long lost love.

A long-time teacher, Mr. Thiebaud based his art on slow and hard-earned know-how. This approach linked him to Americans of the past like Thomas Eakins and John James Audubon and to Europeans he admired like Jean-SimÃ©on Chardin and Giorgio Morandi, whose images were also bound by the strictest geometry.

That said, Mr. Thiebaud’s images were the opposite of mechanical, their slalomed surfaces as rich and thick as the frosting of his painted layered cakes. This tactile luxury was one of the things that separated it from classic Pop painting.

Like Philip Pearlstein, Alfred Leslie and Alex Katz, who emerged like him in the early 1960s, Mr. Thiebaud developed a distinctly impassive style of figuration. Endearing and usually lonely, the characters in his paintings might evoke Willy Lomans in ill-fitting business suits hunched over paperback books, and Twiggy look-alikes in groovy yellow dresses and white boots. They were portraits with the scent of faded Polaroids.

The effect, Mr Thiebaud once said, was meant to be like seeing a stranger “in a place like an air terminal for the first time: you look at him, you notice his shoes, his costume, the pin on his lapel but you I have no particular feelings for him.

Wayne Thiebaud (pronounced T-bow) was born on November 15, 1920 in Mesa, Arizona. His maternal grandmother was one of Utah’s first Mormon settlers in the mid-19th century. Inventor, his father moved the family to Long Beach, California when Wayne was a baby. With the Depression, the family returned to Utah to start farming.

Mr Thiebaud described spending his childhood milking cows, slaughtering deer for meat and planting alfalfa. His uncle Jess, an amateur draftsman, amused him drawing; he attributes this experience, along with cartoon reading, to his early interest in art.

He would later give up Mormonism, farming, and living in Utah, but the landscape stuck with him. Years later, Mr. Thiebaud painted incandescent, slightly ancient landscapes, almost abstract grids of imaginary fields and rivers seen as from a bird’s point of view. These were based on childhood memories, filtered through the study of Chinese painting and Monet, then mixed with real views of the Sacramento Valley, where Mr. Thiebaud eventually settled.

Poetic scenes, ingeniously colored, they could appear as complex as his pies seemed simple. In images like these, Mr. Thiebaud has become a purveyor not only of Western views, but also of Western light, Western silences and Western spaces.

He studied commercial art in high school, quarreled over odd jobs as a sign painter and designer, worked briefly as an apprentice animator at Disney studios (as a lark he had practiced drawing Popeye with both hands at the same time, which helped him get the job), and designed movie poster illustrations.

In the military during WWII, he worked as an illustrator for an Air Corps newspaper, then landed a post-war job drawing a comic book for an in-house Rexall Drug Company magazine in Los Angeles, where a colleague, Robert Mallery, encouraged him to seriously think about painting as a career.

He began by painting expressionist paintings, a bit like John Marin, with a glance turned towards the New York School, then in vogue. But he never lost respect for commercial art, and in this early work he sought to marry the skills and ingenuity of commercial art required with the freedom that Expressionism implied.

He would eventually be in debt to Krazy Kat and Mickey Mouse, to Edward Hopper and JoaquÃ­n Sorolla, the turn-of-the-century Spanish academic painter, as well as to Willem de Kooning, the paragon of the New York school, whom Mr. Thiebaud has met. in the 1950s while briefly living in New York City.

He would later say that he particularly admired the way de Kooning had found a way to “illuminate an image from within.” It was part of the genius of Mr. Thiebaud, as Adam Gopnik, the writer of The New Yorker magazine, pointed out, to extract from such a different artist what has become an essential quality of his own work.

By the early 1960s, while exhibiting at the Allan Stone Gallery in New York, Mr. Thiebaud had produced paintings such as â€œFour Pinball Machinesâ€, â€œBakery Counterâ€ and â€œCakesâ€. Instantly regrouped with the burgeoning Pop movement, he quickly achieved fame, but deep down he shared little with Pop’s instinctive penchant for consumerist satire. For M. Thiebaud, the humble objects, ordinary people and friends he painted were touching and deserved respect. Like him, they remained true to themselves, a quality his art celebrated.

It is also, and for good reason, linked to figuratives of the Bay Area such as David Park and Richard Diebenkorn, playing an important role in the evolution of the Californian art scene in the 1960s, 70s and 80s. The Bay Area during those years, before the technological revolution, was a thriving and independent art center, and M. Thiebaud embodied its best features.

Among these was a low-key, playful, and healthy distance maintained from the greenhouse art world to the east, with its myopic and wealthy obsessions, smugness, and shibboleths. Mr. Thiebaud laughed at this world from time to time. A painting of a tie designer has become a mock Morris Louis; an image of scattered pencils usurped Richard Serra. The humor deflated the pretense, which was completely lacking in Mr. Thiebaud in person.

A longtime professor at the University of California at Davis, Mr. Thiebaud counted very different artists such as Bruce Nauman among his offspring. As his work traded in increasingly astronomical sums, he became a patron of the university museum. During his last decades, major museums have regularly organized exhibitions of his work.

Among them, in 2018, the Morgan Library in New York presented â€œWayne Thiebaud: Draftsman,â€ a preview of his works on paper. At that time, Mr. Thiebaud was 97 years old. His second wife, Betty Jean, filmmaker, had died in 2015. In 2010, his son, Paul, who ran the Paul Thiebaud gallery in San Francisco and New York, died of cancer.

Two daughters, Twinka Thiebaud and Mallary Ann Thiebaud, from his first marriage to Patricia Patterson, survive him, as well as his son Matt Bult, from his second marriage, and six grandchildren..

In his later years he continued to play an incredibly skillful and cunning game of tennis and paint. At 100, he was still on the court, occasionally calling friends, working on new themes: he’d met clowns as a kid hawking newspapers to patrons attending the circus, he said. The memory of these meetings marked him.

â€œIt has never ceased to delight and amaze me,â€ he said, â€œthe magic of what happens when you put one piece of paint next to another.

â€œI get up every morning and paint,â€ he added. “I’ll be damned but I can’t stop.”