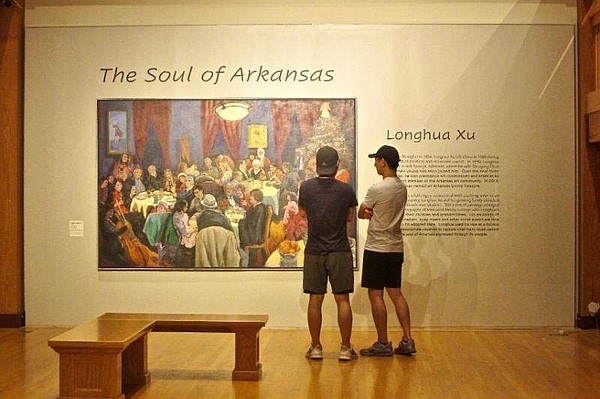 The scenes are as American as apple pie, as Arkansan as fried catfish. Their human faces span generations, personifying “the soul of Arkansas” at the Arkansas Historical Museum.

On display at the Little Rock Museum until mid-October, the 16 acrylic and oil paintings are the work of Longhua Xu. He was born in Shanghai on the last day of 1954 and only emigrated just before he turned 35. Having left China in 1989, the year of the Tiananmen Square Massacre, he spent time in Rochester, NY, before moving to Hot Springs in 1990.

Attentive readers may recognize Xu’s name. In 2019, he received the Arkansas Arts Council’s annual honor as Living Treasure of Arkansas. His paintings of ordinary people doing ordinary activities depict images taken from photographs that he and others took. They compose “The Soul of Arkansas”, exhibited in several forms since 2018.

Xu described the “Soul” paintings as “inspired by my admiration for hard-working Arkansans such as farmers, and by children, all wearing beaming smiles of happiness”. The images also reflect the Chinese tradition of honoring family, especially the elderly.

In “Friends of the Artist,” a 65 x 100-inch acrylic completed in 2018, Xu depicts himself with a few dozen mostly guests seated at round tables for a festive dinner with a Christmas tree in the background. Also pictured is his wife, Chen Shun Ying, who died in 2020.

Solitary figures appear in some paintings. In “Petting Zoo”, a preschool boy wearing a cap reaches through the fence to pet a lamb. In “The Collector”, a woman in a floral-patterned dress is surrounded by trinkets she has accumulated over the years.

“The Woodcarver” depicts an older craftsman in overalls sitting in a rocking chair next to half a dozen canes he has created. “Crochet” shows a seated woman holding in her lap a piece of an orange item that she crocheted

Other paintings, such as “Friends of the Artist”, are crowd scenes. In “Market Place”, goods for sale include a newly laid rooster, hen, and eggs. In “Counting Eggs”, four young people count the dyed Easter eggs they have just hunted.

Xu is also an accomplished sculptor. His enormous “Mother Nature” can be seen in front of the Arlington Hotel at the northern end of Hot Springs’ Bathhouse Row. It depicts a woman pouring water from a jug as deer gather at her feet.

On his website, the artist states that “to fully express one’s ideas, thoughts and emotions, one must master all the techniques of art. Since art is not separated by country or race, it does not nor should it be separated by technique or In this way, the expressions of these ideas and visions are limitless.”

After her prestigious award was announced three years ago, Xu told the Arkansas Democrat-Gazette that becoming an artist is not primarily about talent:

“It’s about expressing your emotion, your philosophy, your ideas through your work. It makes the difference. First you just have the art form to create one thing. Then you move on to another level to express your ideas.”

His insights into the local values ​​of many ordinary Arkansans radiate from his canvases in “The Soul of Arkansas”.

“The Soul of Arkansas”: