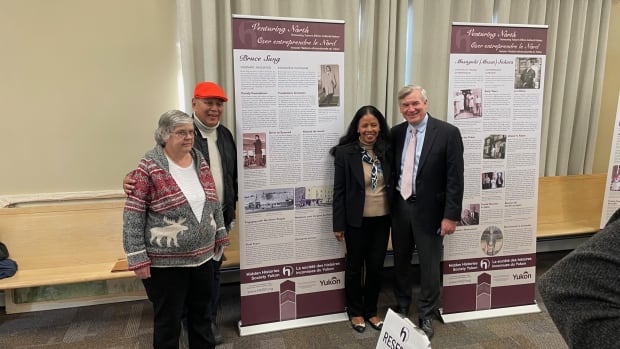 An exhibit featuring the story of a prominent Chinese-Yukon businessman who opened the territory’s first supermarket was one of the signature events co-sponsored by the U.S. Consulate General and Hidden Histories Society Yukon on May 19 to celebrate Asian Heritage Month.

Bruce Sung was born and raised in Vancouver’s Chinatown. His first venture out of Chinatown was catering for the United States Army and Navy in Prince Rupert, British Columbia during World War II. He also took care of different crews that were building the Alaska Highway.

From there he moved to Whitehorse in the 1960s where he opened a hotel, the first supermarket, and also added square footage where the Hudson’s Bay Company was a major tenant.

At the time, it was not easy to be Chinese, says his son Bob Sung.

“Dad was much more accepted here [in Whitehorse] being Asian rather than in Chinatown, because, you know, Vancouver was a big Chinese community and indeed there was a lot of racial profiling and he was the recipient of all that profiling,” Bob said.

Then Chinatowns in North America were ghettos for Chinese communities because of the “colonial attitude,” Bob explained.

There was also a head tax for people coming from China which ranged from $50 to $500 between 1885 and 1923. It is estimated that around 82,000 Chinese paid the fee until the Exclusion Act came into effect in 1923, effectively banning all new immigration from China until 1947.

Bob’s paternal grandfather came to Canada during the head tax era; however, his family was exempt from paying him as he worked as a translator for newcomers.

“Dad never had to pay the head tax, but nonetheless, they were still Chinese,” Bob said.

Despite the challenges, Bob’s father, Bruce, managed to become a successful businessman.

Now Bob is happy to see recent efforts to uncover the history of people of color.

He said his father’s story told at the exhibit was a unique moment for him.

“It’s like a to-do list that I’ll never see again,” he said. “Just having the community see and recognize my dad is just a treat. I’m just blown away.”

The unveiling of the Hidden Stories exhibit was part of a series of events to celebrate Asian Heritage Month sponsored by the US Consulate General in Vancouver, which covers both British Columbia and the Yukon.

Bringing cultures together through music

As part of the programming, the United States Consulate has partnered with the Arts Envoy Program of the Department of State’s Bureau of Educational and Cultural Affairs to also present Pipeline Vocal Project, an all-female a capella trio from Alaska.

The group, made up of Lisa Hawkins, Adriana Latonio and Molly Dieni, gave musical masterclasses to Whitehorse residents and hosted several performances May 19-22.

Latonio, the band’s soprano, said growing up as an Asian American in Anchorage, Alaska was isolating.

“I felt like I didn’t really fit in with anybody there,” she said. “I look different. I was the only one with brown skin and had different facial features and brought different foods that the other kids thought were weird and gross.”

Part of the band’s mission is to bring different cultures together through music, Dieni said.

During their Saturday concert, the group included an international segment where the trio sang songs from around the world and in different languages ​​including English, Japanese, Urdu and Spanish.

“I feel like it’s wonderful to be an advocate for younger generations to say that being Asian can kind of be a superpower for you,” Latonio said.

It was the trio’s first time performing in Canada.

Cultural month is celebrated in Canada and the United States and is an opportunity to highlight the contributions of people of Asian descent to North American society.

Angela Girard, head of public diplomacy at the consulate, said the visit was a chance to strengthen Canada-US relations in the Arctic.

“We kind of took this opportunity to really celebrate the idea of ​​diversity, equity and inclusion and how we can celebrate that in both of our countries,” she said.

Girard added that it was also a chance to connect the arts and cultures of the Yukon and Alaska.

This is the first time in two years that there are in-person events to celebrate Asian Heritage Month in the Yukon.