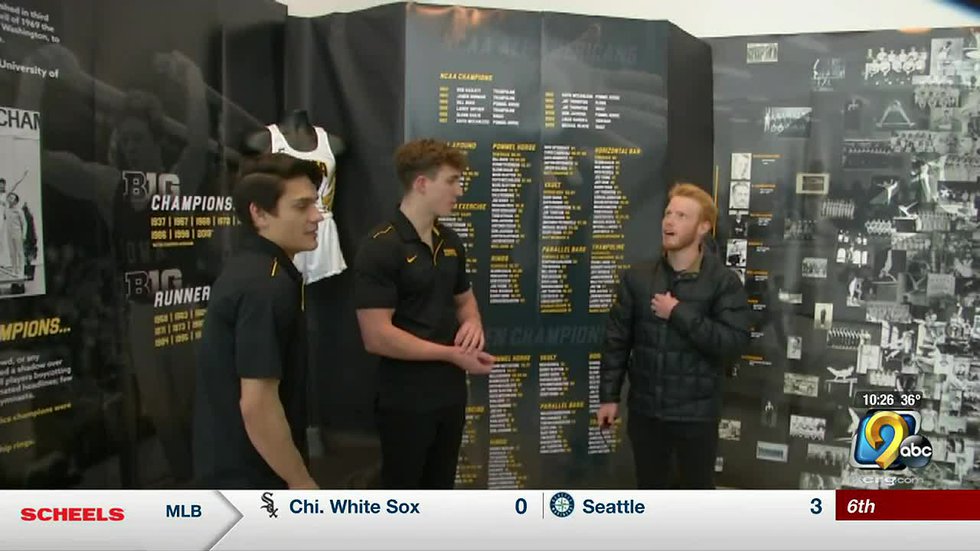 IOWA CITY, Iowa (KCRG) — When he learned that the 2021 season would be the last for Iowa men’s gymnastics, Evan Davis said he was injured.

“For a long time, there was a lot of hatred towards the university and the people responsible for decision-making,” said Davis, a senior from Iowa.

But Davis quickly changed his mind. The graphic design major had one more season to complete and a senior project to start.

“When I started brainstorming the first ideas, I really wanted to show that we had been betrayed,” he said. “But when I started researching the program, there was nothing but love.”

In the fall of 2021, the Iowa men’s gymnastics team had its final season, and Davis—along with teammate Bennet Huang—became Iowa’s last All-American.

The team’s legacy lives on in room E-450 of the Iowa Visual Arts Building, with Davis’ main project.

Davis says that just like in gymnastics, graphic design is about getting better and reaching new heights.

“Every project I’ve done, I’ve tried to get bigger and bigger and see how far I can push myself,” Davis said. “It’s something I really learned from gymnastics. That dedication, the grind, and knowing how to keep pushing myself until I figure out what my limit is.

The project celebrates the team, from its debut to its final season. It will be dismantled on Saturday, March 26 at 10:00 p.m., but the team’s legacy lives on in GymACT, a non-NCAA organization for college gymnastics teams.

As for Davis, he will always set the bar high.

“That’s kind of what this project was,” Davis said. “Finding out how far I could push it, a little bit further, I always feel like I have room to grow.”

From a Warhol Marilyn record to the death of art patron Budi Tek: The best and worst in the art world this week