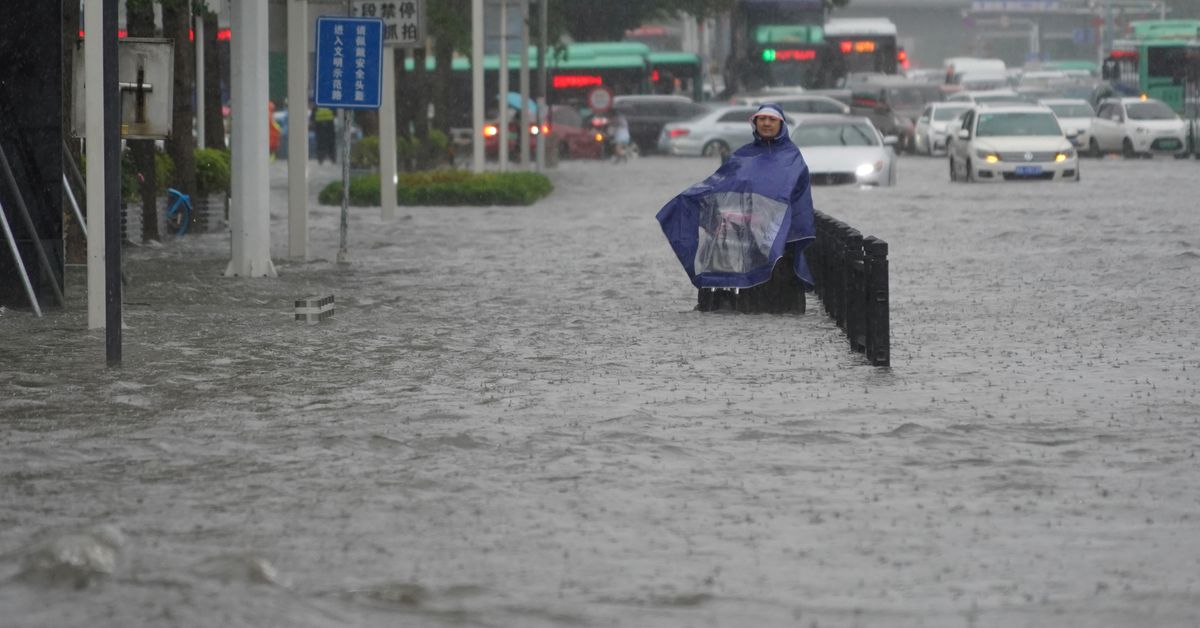 A resident wearing a rain cover stands on a flooded road in Zhengzhou, Henan province, China, July 20, 2021. cnsphoto via REUTERS

Henan, a province twice the size of Austria, has been hit by storms since the weekend during an unusually active rainy season.

No deaths or casualties have been reported, but the daily lives of the province’s 94 million people have been disrupted by the closure of transport.

In Zhengzhou, the capital of Henan on the banks of the Yellow River, more than 200mm of rain fell in an hour on Tuesday, forcing the city to shut down all subway services.

A dramatic video shared on social media showed waist-deep commuters in murky flood water in a subway train and a subway station turned into a large, bubbling swimming pool.

Henan is a major logistics hub, but rail services have been suspended, while many highways have been closed and flights delayed or canceled.

In Ruzhou, a town southwest of Zhengzhou, the streets were turned into torrents, sweeping away cars and other vehicles, social media footage showed.

Like the Longmen Caves, the Shaolin Temple in Dengfeng City, famous in the West for its martial arts, has been temporarily closed.

Also in Dengfeng, an aluminum alloy factory exploded on Tuesday as water from a river entered the factory. Read more

At least 31 large and medium reservoirs in the province have exceeded their warning levels.

The highest was in the city of Lushan, which saw 498mm of rain, according to the provincial meteorological office.

“It’s the heaviest rain since I was born, with so many familiar places inundated,” a netizen from the flooded city of Gongyi said on Chinese social media.

The rain is expected to end by Thursday.

Asians are represented in classical music. But are they seen?