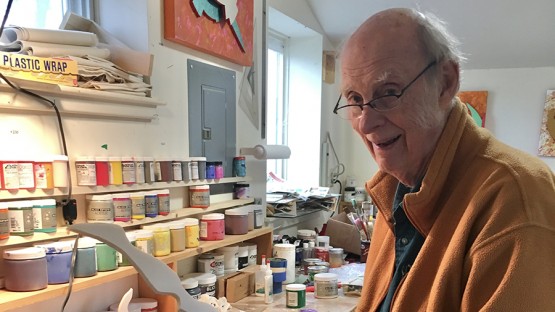 
Stan Bowman was born and raised in California and trained as an architect. But his career as a photographer, which began in the late 1950s with a 35mm film camera and black and white film, led him through the digital revolution. Bowman died on July 5 in Ithaca, New York, at the age of 87.

From the collections of Bowman Sculpted Paintings – 3D shaped works on canvas and foam board with multiple layers – and application snippets, printed as shaped works that float on the wall: (left) Sweeping away IPhone screenshot taken via multiple apps, printed on Hahnemühle Fine Art Baryta satin paper, ~ 26 “x26”; (right) Coffee, Pano iPhone captured with the 360 ​​app.

At the University of California-Berkeley, Bowman received a BA in Sociology in 1959 and a BA in Architecture in 1964. An MA in Photography from the University of New Mexico-Albuquerque followed in 1973. La the same year he accepted an offer to teach in Cornell’s Department of Architecture. A few years later, he transferred to the Department of Arts, where he taught photography and digital imaging for almost 30 years. He was promoted to full professor in 1987 and was director of the department from 1980 to 1985. He was associate dean of the AAP (1992-96), acting dean of the AAP (1996-97) and associate dean for the technology (1997-98). He retired in 1999.

“Professor Bowman’s experimentation with spatial representation and digital art has helped shape the direction of photography, print and mixed media,” said AAP Dean J. Meejin Yoon. “His contributions to the art department, to his students and to the college were not only enduring but imbued with his spirit of discovery. Our hearts go out to his family, colleagues and former students during this sad time.”

In 1985, Bowman found himself at the dawn of the digital photography revolution and embraced the new media it presented. An IBM-funded Cornell Faculty Technology Innovation Grant (FIT) of $ 20,000 gave him access to a state-of-the-art IBM computer, software and color printer, the first of its kind. Around the same time, he discovered an image capture video graphics card connected to an external video camera that could produce photographic-quality images and animation.

Although he’s been doing computer imaging since the 1980s, it wasn’t until the mid-1990s that Bowman found his own way of expressing using new technology.

“When switching to a new medium, it’s not uncommon for an artist to have a hard time being heard,” Bowman wrote. “It’s about really starting to understand the materials and how you relate them to your personal life experiences. It’s about mastering the new language, which is necessary for artistic expression.”

“One of Stan’s outstanding characteristics as an artist was his love of experimentation,” said Perlus. “As digital technology evolved, Stan kept pace with it, finding ways to use new devices and their expanded capabilities for artistic purposes in both his work and his teaching. was possible at Cornell. Her openness to arts and technology has helped me and other art teachers embrace technology in art studios.

With the arrival of the iPhone in 2012, Bowman began experimenting with iPhone photography, large format printing, and apps. “My first training in art made me discover abstract painting which was then dominant and still strong today in the art world,” he writes. “So my inclination led me to use the iPhone to capture direct photo images and then use some of the newly available apps to take and translate those photo images into often unrecognizable abstract images. “

Bowman’s artistic work appears in the permanent collections of the Art Museum at the University of New Mexico, Albuquerque; the San Francisco Museum of Modern Art; The National Library of Paris; Erie Art Museum, Pennsylvania; Museums of Aurillac, France; and the German Photographic Society, Cologne, Germany, among others.

Awards that supported his exploration and achievements included an Award of Excellence from the Society for Contemporary Photography (1986) and artist residencies at the Cité Internationale des Arts, Paris (1987) and the Virginia Center for the Creative Arts ( 1990). His work appeared in 50 years: Modern color photography, 1936-1986 (Van Soest, 1986), The Village Voice, Innovative engraving, Zoom magazine, and Street. He has exhibited in galleries and exhibitions from Ithaca to the United States to Europe, including the Harris Gallery, New York City; the Art Institute of Chicago; and Galerie Artique, Lyon, among others.

Bowman has written eloquently about his exploration of the expanding field of digital photography.

A memorial service will be held on Saturday, July 31 at 4:00 p.m. at 203 Pine Tree Rd., Ithaca, New York. The family requests that those interested in participating RSVP to [email protected] Friends, students and colleagues are encouraged to send their memories of Professor Bowman prior to the service to [email protected]

This story first appeared in the News section of the Architecture, Art and Planning website.