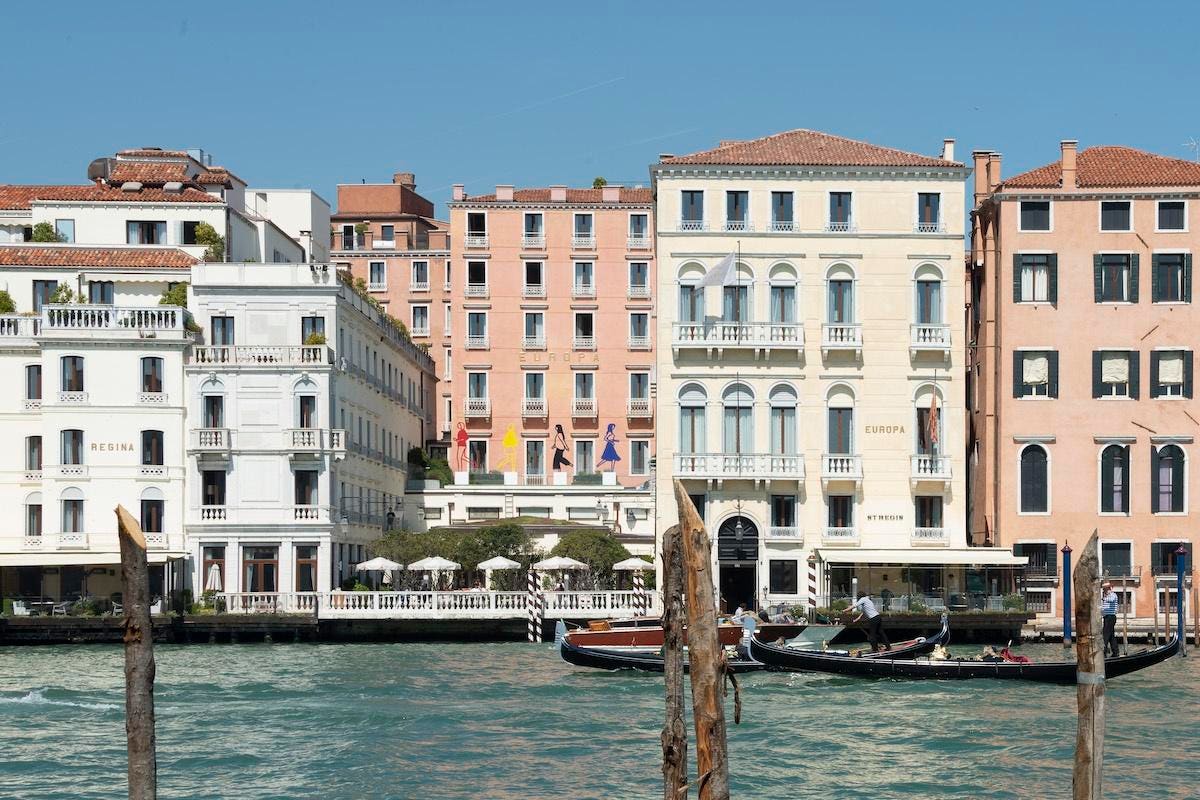 One of the world’s first grand luxury hotels, the Grand Hotel Britannia on the Grand Canal in Venice has undergone extensive renovations to reopen as The St. Regis Venice. The wonderful canal location, opposite Santa Maria della Salute and minutes from Piazza San Marco, couldn’t be better. And behind the hotel is Calle XXII Marzo, filled with high-end boutiques, art galleries, and access to the Grand Teatro La Fenice, the city’s opera house.

The St Regis continues its tradition as a culture-focused hotel with an eclectic collection of contemporary art from artists such as Ai Weiwei, Tony Cragg, Erwin Wurm, Gregor Hildebrandt, Esther Stocker, Rosa Brueckel and Gregor Schmoll. In the living room is a Venetian glass chandelier by Chinese artist Ai Weiwei. Made of clear glass sourced from the workshops of master craftsmen on the island of Murano, the piece appears at first glance to be a traditional Venetian chandelier, but a closer look will reveal some of Ai Wei Wei’s trademark surprises. Outside, in the upper garden, is a sculpture that is a miracle of logistics, thanks to the determination of art curator Dr. Gisela Winkelhofer. The four aluminum and steel sculptures by Julian Opie, Run to Venice, were transported from the UK, traveled up the Grand Canal on a tugboat and were lowered by crane to the St Regis Terrace.

The five “palazzi” that make up the hotel include Badoer Tiepolo, a palace dating from the 17th century. In the 19th century, the Tiepolo, Barozzi and Regina palaces were transformed into the Gran Britannia hotel. Sensitively refurbished by the London-based interior design studio Sagrada, each of the St. Regis Venice’s 130 rooms and 39 suites has been furnished with the building’s artistic and cultural heritage in mind, while adding modern glamour. The Superior Suite is the art-inspired two-bedroom Presidential Suite, a contemporary artist residence overlooking the Grand Canal. Some rooms and suites have private terraces: there are 14 in total, which is unusual for a hotel in Venice.

The exquisite Venetian style throughout the hotel includes bespoke fabrics and custom handcrafted furniture inspired by the curves of gondolas, the patterns of the Doge’s Palace, the pavements of St. George’s Cemetery, and the Grand Canal itself. An eclectic collection of artwork and sculpture inspired by the city’s artistic heritage will also be curated, bringing ancient Venice to today’s luxury travelers in a modern way.

Eating and drinking at the St Regis is a delight, both for the food and the beautiful setting. Gio’s Restaurant at the St Regis offers simple signature dishes using fresh local ingredients. The Arts Bar spills out onto the outdoor terrace and serves modern and classic art-inspired cocktails with a disruptive twist. Breakfast, one of the best in Venice, is also served on the outdoor terrace overlooking the Grand Canal.

The St Regis is the best place to enjoy one of Venice’s most exciting festivals. He Redeems (Feast of the Redeemer), is a low-key Venetian party not to be missed. On a weekend in July, the festival celebrates the end of a terrible plague 400 years ago. Although little known outside of Italy, it is famous for Venetians and thousands of people attend. The festival consists of erecting a temporary bridge, decorated with bright colors, which connects the Zattere to the church of the Redentore on the island of Giudecca. There is also the sailing regatta in the Giudecca Canal on Sundays. But the main attraction is on Saturday evening when over 45 minutes of incredible fireworks are shot off in the San Marco Basin. From the terraces of the St Regis, patrons can watch the light show and see thousands of small illuminated boats also watching from the Grand Canal. It is a truly magical and unique event.