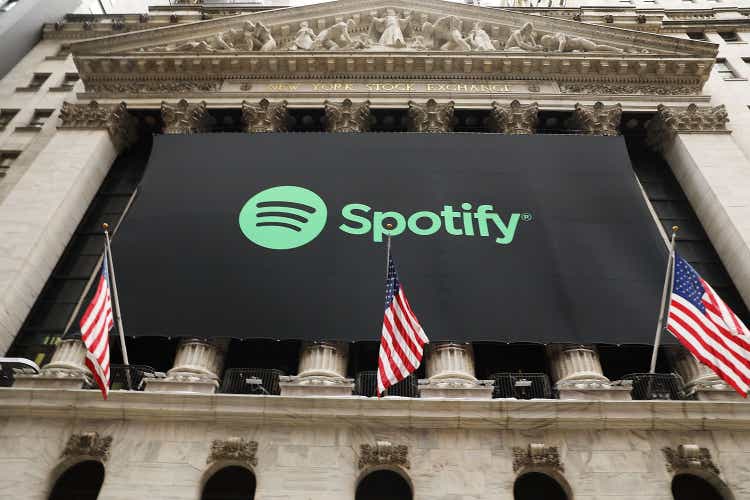 Spotify (NYSE: SPOT) possesses fell 10.7% at an all-time low, breaking through the $100/share barrier after a mixed report in the first quarter which initially attracted positive attention, but analysts raised concerns about the margin forecast.

Revenues were mostly in line with expectations with 24% growth, and users grew at a 19% pace (premium subscribers grew 15% given the gradual decline in Russia). Ad-supported monthly active users also exceeded expectations with a growth rate of 21% to 252 million.

That’s better than feared, Citi reports, though he’s worried about Spotify’s forecast that second-quarter gross margins would hold steady at 25.2% (slightly below estimates of 27 %) – as well as forecasts of an operating loss of 197 million euros.

JP Morgan agreed the report was strong, with most metrics beating expectations (once you exclude Russia), “and we’re encouraged that ad revenue continues to grow 20%…suggesting an increase traction of podcast ads”. But he’s also concerned about guidance for the same issues: operating loss and gross margin.

Truist Securities likes the “very strong” report – although it adds that not only gross margin forecasts but also subscribers were below its model.

Citi, JP Morgan and Truist all have buy ratings, but a bear also weighed in: Underweight Wells Fargo also found the margin forecast to be the “most worrying” part of a report, but praised the growth in average revenue per user (premium ARPU increased by 6%, or 3% at constant exchange rates). Sentiment has turned against the business model and the margin is the “pivot” to a rebound, according to the bank.

In the latest podcasting news, Barack and Michelle Obama have parted ways with Spotify, planning to move their post-White House podcasting projects to another house.