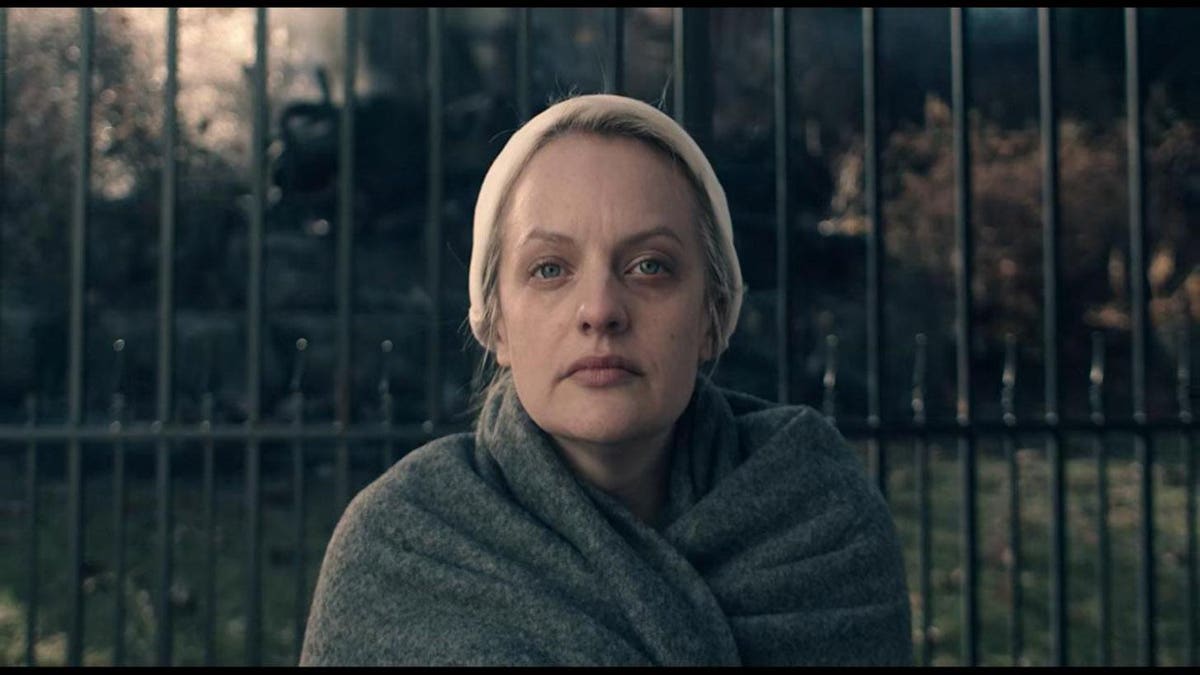 Hulu released the first three episodes of The Handmaid’s Tale all of a sudden last Wednesday, giving viewers the chance to binge on a bit at the start of the season, but not going as far as Netflix and releasing every episode at a time.

It’s a smart strategy, although I still think weekly going out is better than going out too fast. Even three episodes at a time feels like a missed opportunity to extend the conversation on each episode.

But all that doesn’t matter. I was supposed to start reviewing this show and ended up getting too busy and a little overwhelmed by the prospect of writing three reviews at once. I’m late and I apologize, but here we are.

Season 3 picks up exactly where Season 2 left off. June (Elisabeth Moss) chose Sophie, sending baby Nichole with Emily (Alexis Bledel) to Canada while she remains in Gilead, still on her quest to save her daughter, Hannah.

Commander Lawrence (Bradley Whitford) is baffled by her decision to stay, but drops her off at the house where his daughter is being held as another act of inexplicable help and kindness (her generous actions become more and more confusing as she goes. as the season progresses and we learn more about this mercurial and powerful man).

Of course, it doesn’t take long before the Guardians show up to take him away. Before she leaves, she is confronted with her daughter’s new “mother”, who – aside from being in a position of relative power in a vicious regime – seems like a decent sort, certainly not the worst person to live with your daughter with, fortunately. She’s still involved in horrific human rights abuses, but at least she’s not as bad as some of the brides we’ve met.

Not that it makes being forcibly separated from your daughter while being held as a sex slave against your will less of a bitter pill to swallow. June is brought back to Waterfords where she is confronted with Serena (Yvonne Strahovski) and Commander Waterford (Joseph Fiennes) about the baby. This is possibly the weakest moment of the whole episode. Serena’s grief and angst is more frustrating than anything, and the whole scene felt like spinning wheels, missing the emotional beats they were looking for.

I enjoyed the next scene much more. Serena, caught between disgust for her husband and mixed feelings about Nichole’s trip to Canada, walks into her room and sets her bed on fire. She might have burned her if June hadn’t come to her aid, helping her escape hell. June watches the house burn with relish.

This good feeling is cut short when she is taken back to the maids training center where she is punished with relatively minor foot torture. Don’t get me wrong, it’s still horrible, but June has a certain degree of plot armor that has, so far at least, kept her from facing the same level of consequences as other maids, like Emily for example. .

I realize the maids are a bit more immune to the brutality of Gilead’s sadistic punitive measures than, say, Marthas due to their ability to have babies, but June seems to get away with a lot. and i dont know how to feel about it. On the one hand, I obviously want her to succeed in saving Hannah and helping topple the horrible government of Gilead; on the other hand, it’s almost like the worst of June has already passed, like she’s settled into this terrible pace where she can’t really move forward, but she’s never really in danger either. , no matter how many times she escapes, helps rebellion or “kidnaps” babies.

After her stay at Handmaid Institution is over, June is taken to her new commander who is, of course, Commander Lawrence. Lawrence is this season’s wild card, and while I talk about it more in reviews of subsequent episodes, I’ll say I’m still not sure what to make of the man and his opaque motivations.

It’s a good place to end, however, when it comes to these things. Lawrence, whether ultimately good or bad or both, is at least not a rapist. He and his wife, Eleanor (Julie Dretsin) are each fascinating but never cruel as the Waterfords could be. Eleanor isn’t cruel at all, but something’s wrong with her brain and her lucid moments are caught between fits of paranoia.

At the end, Lawrence gives June a evaluative look and says, “You’re not going to be a problem, are you?”

“No sir,” she replies, before having that expression on her face – that grim, determined smile. Oh, she’s going to be in trouble, okay.

Elsewhere, Emily and baby Nichole make the grueling crossing of the river to get to safety. On the other side, Canadian border patrol officers find her and reassure her that they are only there to help her. They quickly ask her if she is seeking political asylum in order to make it all legal, and she is taken to safety, although her PTSD is not going anywhere anytime soon.

At the hospital, she receives a standing ovation, a surprising welcome and almost too emotionally strong for the traumatized woman, who is still shaken by all her suffering. It is good to be free, but just like soldiers returning from war, escaping this kind of degradation, persecution and torture makes it difficult to adjust to a “normal” life.

There are a lot of unanswered questions. What will Serena do? Will she join her fellow human beings in trying to undo the very system that left her so lonely at first, or will she embrace her inner tyrant? Is Commander Lawrence really someone to trust, or is he just playing with the women in his household? What’s his long game here? And what will happen with Nick (Max Minghella), someone who clearly still has feelings for June – feelings that are clearly mutual.

So many things could go so horribly wrong in the coming season, it stresses me out a bit. It’s a stressful TV show. I don’t know how long this tension can last before real changes start to take place. How many seasons of torture and oppression can we endure before we start to see characters like Commander Waterford get his reward?

Still, this episode was brighter and more promising than most of the previous ones. Emily and Nichole are safe, at least for now. And June is in a home where she won’t be subjected to daily cruelty, humiliating ceremony or Serena’s tumultuous mood swings, not to mention Commander Waterford’s petty authoritarianism. It is still captivity. It’s still a really bad place, and she still isn’t close to finding a way to get her and Hannah out of Gilead, but it’s a silver lining.

Rebellions are based on hope.