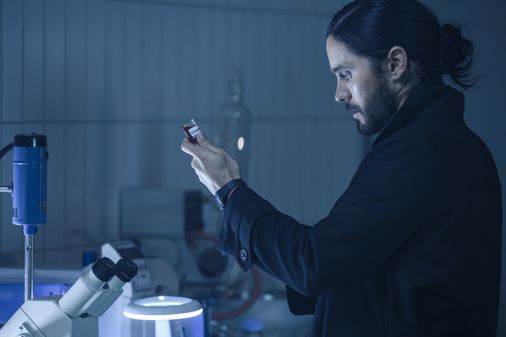 “Morbius”: say hello to a different type of Batman

Dr. Michael Morbius is an awesome guy. Since childhood, he has suffered from a rare genetic disease that requires three blood transfusions a day. That didn’t stop him from inventing artificial blood (it’s blue, not red) and winning a Nobel Prize. He declined the award. He doesn’t think he deserved it, as he has yet to find a cure for this rare disease, which also afflicts his best friend. He is also good at origami.

With the help of vampire bats, he thinks he’s found a cure. Martine, the doctor colleague he is in love with, urges caution. Wait, caution in a superhero movie? Good luck with that. “We have to push the limits,” Morbius told him, “taking the risks. Without it, there is no science, no medicine, no breakthrough at all. »

You can see where this leads.

Morbius injects himself with a cocktail of vampire bat DNA and human DNA, then runs into the law of unintended consequences. Let’s just say there are ways he’s more of a Batman than Batman – or at least a vampire Batman. You don’t want to be the flight attendant asking what his drink selection is.

As Morbius, Jared Leto has all the hair he lacked in “House of Gucci” and looks haunted and soulful. He does it well. (It’s a draw between Leto and Cillian Murphy for the male actor with the most beautiful eyes in cinema.) It’s true that in a superhero showdown with Dr. Strange, Dr. Morbius would be a serious underdog. He’s friendlier unless you’re near a blood bank.

Adria Arjona, as Martine, doesn’t have much to do but look worried. She’s not particularly good at it. Matt Smith, who was the creepy boyfriend in “Last Night in Soho,” plays the best friend. Sidekicks in superhero movies do just fine. Best friends, not so much. They’re up there with the Spinal Tap drummers for job security. Tyrese Gibson, as a tough FBI agent, is more furious than fast.

Even at 104 minutes, practically a short by superhero movie standards, “Morbius” feels dragged out. Daniel Espinosa (“Easy Money”, “Life”) directed. Also unusual for a superhero movie, it looks serious. This honors the character of Morbius but rather violates the spirit of the genre. The film is not entirely devoid of humor. There’s a much underrated Venom reference, and when Martine offers Morbius coffee, he says, “No thanks, I quit the caffeine.”

What makes the joke funny is that we saw Morbius swallow blood bags. The spectacle is disturbing, even more so than the filmmakers likely intended. It’s pretty easy to see the various influences that “Morbius” derives from: vampire movies, werewolf movies, “Doctor Jekyll and Mr. Hyde,” Spider-Man, the whole science lore gone wrong. . But the sight of these plastic bags as drinking containers is really original. This does not mean that originality is welcome.

Mark Feeney can be contacted at [email protected]