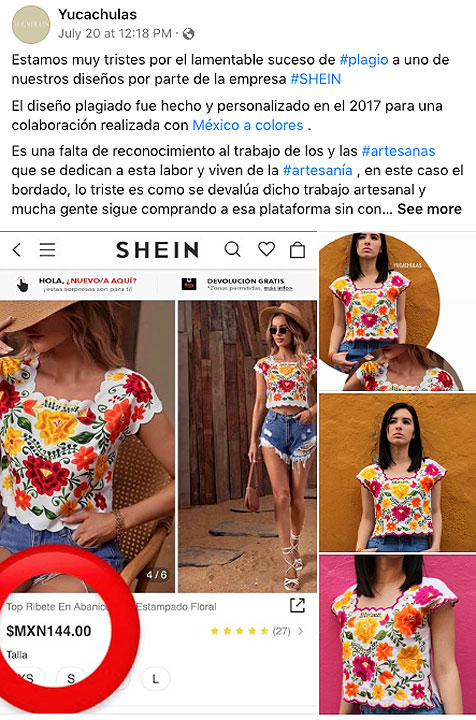 Mexico concerned over Chinese retailer Shein’s use of Mayan design

MEXICO CITY — Mexico has questioned the use of cultural elements from the indigenous Maya community by Chinese fast fashion company Shein in the design of one of its garments, prompting the retailer to remove the product from its site website.

The Culture Ministry said some details of Shein’s “Top Fan-Trim with Floral Print” were similar to a traditional huipil embroidery made in 2017 by an artisanal clothing brand from southeastern Mexico.

“These designs have been passed down from generation to generation, so they are the product of collective creativity corresponding to the Mayan people,” the ministry said in a letter to the company.

Shein, a fast-growing online store that has been considering a New York listing, said on Thursday it had removed the product from its website and had no intention of infringing on anyone’s intellectual property. .

“We reaffirm our respect for artisans in Mexico and around the world,” a spokesperson for Shein said via email.

Mexican brand Yucachulas, responsible for the original piece, said on social media that it was “deeply saddened” by what it called plagiarism.

“It represents a lack of recognition for the work of artisans who are dedicated to this craft and live from craftsmanship.”

The Mexican government has in the past called on major foreign companies to explain examples of what it calls commercial exploitation of distinctive elements of Mexican culture in their products. — Reuters