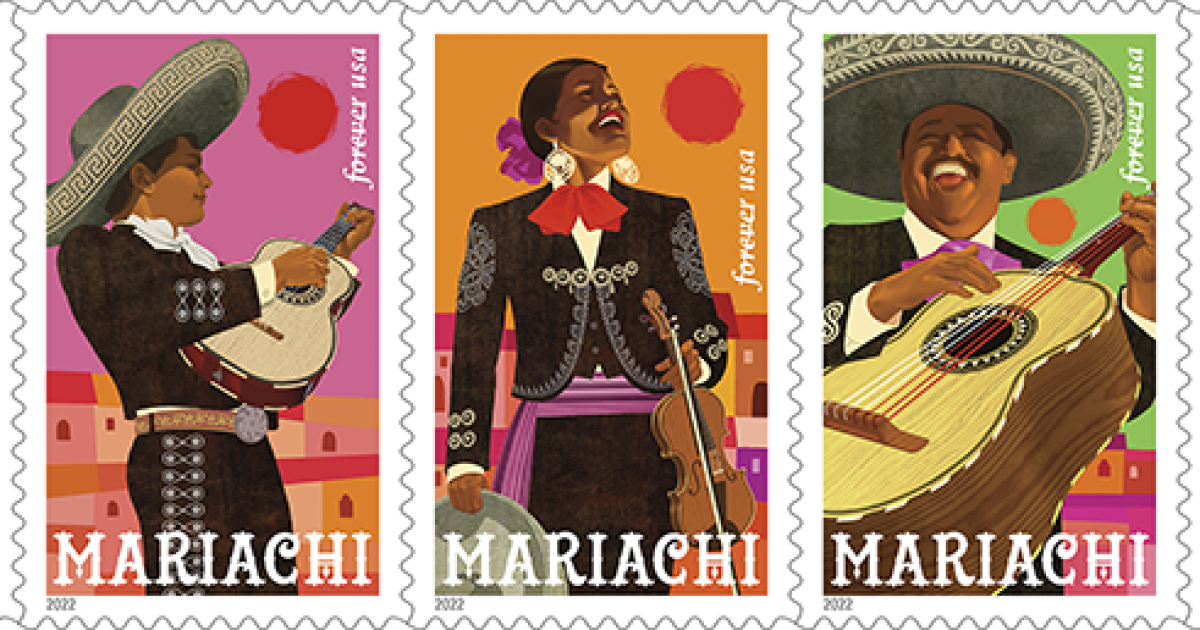 Mexican art of mariachi takes center stage on US stamps

There are few corners of the globe where the echoes of mariachi music have yet to reach, filling street corners with the sounds of the trumpets and guitars that form the backbone of the traditional Mexican genre.

Now all that party fever is wrapped up in a tiny US postage stamp.

The U.S. Postal Service celebrated the release of a new set of stamps honoring the mariachi on Friday. The day one ceremony took place in New Mexico’s largest city as musicians and fans from around the world gathered for a weekend of concerts hosted by Albuquerque’s 30th Mariachi Spectacular.

The five graphic stamps were created by artist Rafael López, who lives and works in both Mexico and San Diego. Each features an individual performer dressed in traditional clothing with their instrument. While the outfits are ornate, the backgrounds are simple and bright, inspired by the palette of another Mexican craft – papel picado, the elaborate paper cutout banners that are often put up for parties and other events. .

While mystery surrounds the origins of mariachi, López said there’s no doubt the beats and rhythms that evolved over centuries in tiny Mexican villages are now known around the world. There’s something special about the celebratory nature of mariachi, and Latinos are proud to be able to share that with other cultures, López said.

And having it recognized on stamps now is a bonus, said Robert Palacios, executive director of the Las Cruces International Mariachi Conference, which is held each November in the border town.

Palacios, 32, plays the guitarrón and credits music with keeping him out of trouble when he was in middle school.

“It just changed things for me,” he said. “That’s what I wanted to do and now, 20 years later, I’m the director of the mariachi conference and I’m just working to keep it alive. So it’s come full circle for me, being a student and now able to share this passion.

The mariachi high can be magical, Lopez said, leaving people in a festive mood and turning strangers into quick friends. But he can’t explain if it’s the beat, the outfits, the vocals, or all of it combined.

“It’s a universal thing that mariachi has and it’s hard to explain,” he said in an interview from his studio in San Miguel de Allende, Mexico.

“We all need a little time to relax and feel happy once in a while and this music does that,” he added. “So I think it’s something that makes us Latinos very proud to see something that started in this area of ​​Mexico and all of a sudden becomes part of the culture of the southwest, it’s also part of the U.S. In no time, it’s universal, it’s international.

López grew up in Mexico City surrounded by mariachi music. He plays guitar, violin and six-string guitarrón which provides the bassline for a mariachi ensemble.

He knows where each band member needs to place their hands to create that special tone. And this is reflected in the images on the postage stamps.

The images were also inspired by movie posters from the golden age of Mexican cinema in the 1940s and 1950s and by travel posters issued by the US government in the late 1930s and early 1940s. .

“I wanted to have that quality of nostalgia,” said López, who also created the Latin Music Legend Series Merengue stamp and illustrated a children’s book by U.S. Supreme Court Justice Sonia Sotomayor. “I didn’t want it to look modern, but rather something we would remember as kids.”

For the next generation, Palacios said he hopes this new wave of attention will spark more inspiration.

“It’s a big step for our culture, a beautiful step,” he said.

Galleries/Exhibitions: Plastic, Scrap and a Bit of History: The Story of an Island