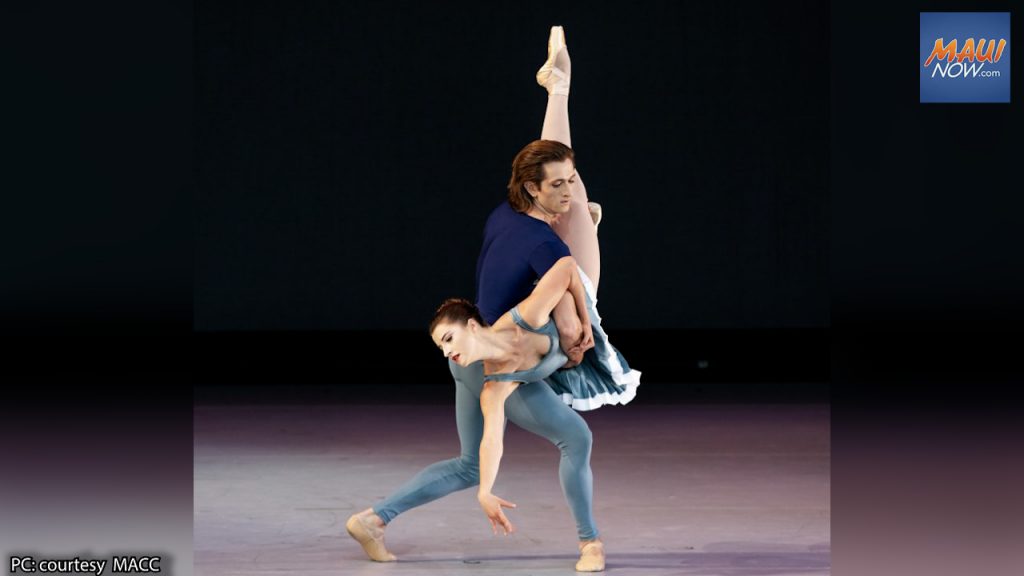 KAHULUI – Stars of American Ballet with a cast of principal and solo dancers from New York City Ballet and other renowned companies will perform Thursday, March 10 at 7:30 p.m. at the Castle Theater. The touring group is founded by Daniel Ulbricht, principal dancer with New York City Ballet since 2007. Sponsors in attendance include the National Endowment for the Arts. Masks are mandatory. To purchase tickets, call 242-7469 from 10 a.m. to 4 p.m. Tuesday through Friday, visit online anytime at mauiarts.orgor stop by the ticket office during opening hours.

KAHULUI — A statewide juried exhibition of Hawaiian artists and their portrayal of islanders is on display at the Schaefer International Gallery through March 19. The Maui Arts & Cultural Center Gallery is open Tuesday through Saturday from 10 a.m. to 4 p.m. The gallery is also open during select events Tuesday through Saturday until 7:30 p.m. for select shows at the Yokouchi Castle and Pavilion. For more information, call 808-242-2787. Free entry.

Dance of the night grooves

LAHAINA — Paul West entertains on the rooftop with a variety of classic rock, country, blues and original songs at Fleetwoods on Friday, March 11, during happy hour from 3:30 p.m. to 4:30 p.m. For more information, go to you on fleetwoodsonfrontst.com or call 808-669-MICK.

WAILUKU — Andrew Molina and Friends perform at Maui Coffee Attic on Friday, March 11 at 6 p.m. It’s Willy Wainwright on fiddle, James Somera on cajon and percussion, ukulele virtuoso Andrew Molina and Jay Molina on bass and guitar, playing a wide genre from Hawaiian music to classical. Andrew Molina has performed on the East and West Coasts as well as in Tahiti, the UK, Scotland, Ireland, Austria and China. Tickets to mauicoffeeattic.com or call 808-250-9555.

KIHEI – Hawaiian music group Kanekoa is hosting an album release party on Saturday, March 12 at 7:30 p.m. at the ProArts Playhouse in Azeka Place Mall. The performance featuring the album “Songs From The Great Disruption” is expected to last 2 hours and 15 minutes with an intermission. Tickets are available at ProArtsMaui.com or call 808-463-6550.

KIHEI — Maui artist Eric Gilliom performs Saturday at 7:30 p.m. at Nalu’s at the Azeka Place mall. Gilliom, featured in the movie “Get A Job” and in his solo piece “White Hawaiian”, is a vituoso actor/singer, performing in a variety of musical genres. To check Nalu’s schedule, call 808-891-8650 or visit naluskihei.com.

songs of the mountains

WAILUKU – Maui musician Drew Martin performs songs and stories from the mountains and valleys of West Maui that have inspired his music. His music is a mix of slack key guitar, Hawaiian and folk blues. For ticket information for the Saturday, March 12, 6 p.m. show, contact mauicoffeeattic.com or call 808-250-9555.

KAHULUI — Broadway star Sarah Uriarte Berry joins the Maui Pops Orchestra for a tribute to “Judy Garland & Friends” on Sunday, March 13 at 3 p.m. at the Castle Theater at the Maui Arts & Cultural Center. Berry has performed in several Broadway shows and three national tours. The Pops is led by musical director James Durham. Masks are mandatory. To purchase tickets, call 242-7469 from 10 a.m. to 4 p.m. Tuesday through Friday or go online anytime at mauiarts.org.

KIHEI — Maui songwriter Anthony Pfluke performs his music Sunday at 6:30 p.m. at Nalu’s at the Azeka Place mall. Pfluke’s album “We Will Rise” received high ratings and was a finalist for the Nā Hōkū Hanohano Awards. His music plays regularly on radio stations KPOA and Q103 and he was also featured at the first “Drive In Concert” at the Maui Arts & Cultural Center which included a live broadcast from the Castle Theatre. He also partnered with slack key artist George Kahumoku in the songs. The Pfluke website is MauiAnthony.com. To check Nalu’s schedule, call 808-891-8650 or visit naluskihei.com.

MAALAEA — Reggae band The Late Ones performs Sunday, March 13 at 8 p.m. at Da Playground Maui. The group, founded in Lāʻie, Hawaiʻi, is based in Gardena, California. Tickets on daplaygroundmaui.com For more information, call 808-727-2571.

WAILUKU – Monday morning will be musically loaded at the Maui Coffee Attic. Jason Tepora plays jazz guitar at the Maui Coffee Attic Monday, March 14, 8:30 a.m. to 10:30 a.m. Then at 11 a.m., master lap steel guitarist Geri Valdriz joins his band to play traditional Hawaiian music. Valdriz shares some history of the steel guitar, an instrument first used in Hawaiʻi that has spread to other parts of the world. For more information on the performance on Saturday, March 12 at 6 p.m., contact the mauicoffeeattic.com or call 808-250-9555.

WAILUKU — David Fraser plays blues on keyboards at the Maui Coffee Attic during a free performance Wednesday, March 16 at 8:30 a.m. Fraser sings original songs. For more information on the performance on Saturday, March 12 at 6 p.m., contact the mauicoffeeattic.com or call 808-250-9555.

WAILEA – Nā Hōkū Hanahano Awards finalist Tarvin Makia performs Wednesday, March 16 from 4:30-6 p.m. at The Shops at Wailea. Makia, born and raised in Hauʻula, has been performing for decades on Maui and traveling the world. He performed in bands such as Mele ʻOhana, Tunana da Band and Hapa.

LAHAINA — 20-minute historic tours are offered almost daily in Lahaina, the first capital of the Hawaiian Islands. There are daytime and candlelight tours of the Baldwin Home Museum, former home of Dwight Baldwin, a missionary and physician in the 1800s. There are also tours of the Wo Hing Museum, including an old social hall and a religious temple for Chinese immigrants. For more information, visit lahainarestoration.org The foundation also has a Hale Paʻi Printing Museum, where the first Hawaiian-language newspaper was printed. The museum is on the campus of Lahainaluna High School, the first American school west of the Rockies. For more information on Hale Paʻi, call 808-667-7040.