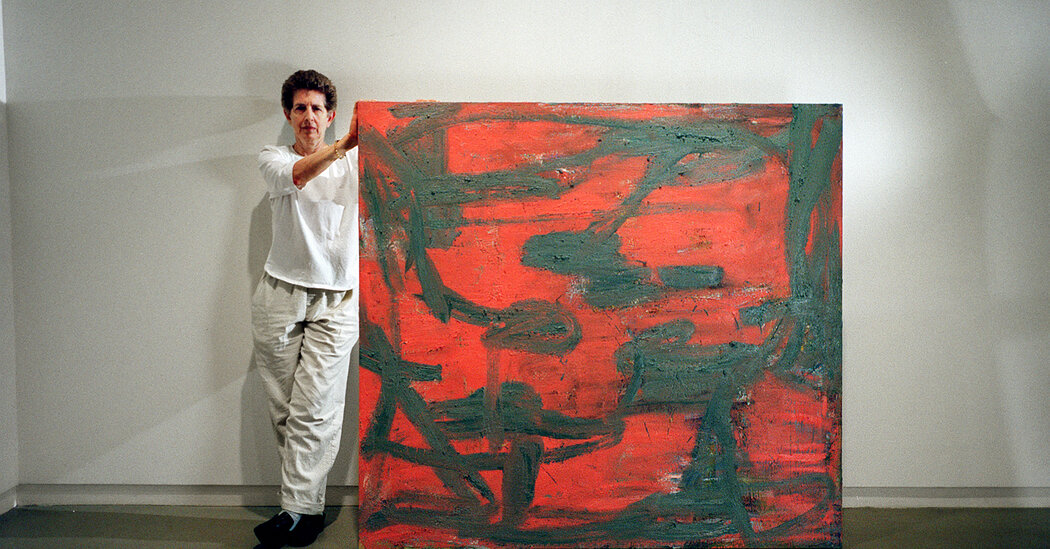 Louise Fishman, a widely exhibited artist who imbued her abstract expressionist paintings and other works with elements of feminism and gay and Jewish identity, died July 26 in Manhattan. She was 82 years old.

His wife, Ingrid Nyeboe, said the cause was complications from an ablation, a heart procedure.

Mrs. Fishman continuously explored new themes and techniques, generally giving its own twist to the male-dominated genre of Abstract Expressionism.

She was influenced early in her career by first-generation Abstract Expressionists, men of the Jackson Pollock era, but by the mid-1960s she began to immerse herself in the gay and feminist movements, joining protest organizations like WITCH – the Women’s International Terrorist. Conspiracy From Hell – and share ideas and frustrations with other women in an outreach group. This led her to rethink her art.

“I decided to never paint again unless it came from my own experience,” she said. told Brooklyn Rail in 2012. “Because I’ve said it over and over, being in my group of women and examining in depth where everything is coming from in my work, I realized that I hadn’t had any thought outside of the male tradition of art history and the contemporary. the history of art.”

Among the works she subsequently produced was her “Angry” series, which began in the early 1970s, with each canvas bearing a name in the middle of a furious field of paint. It was meant to evoke the anger she imagined being felt by the women in her group as well as various public figures. There was “Angry Marilyn” for Marilyn Monroe and “Angry Paula” for gallery owner Paula Cooper. And, of course, “Angry Louise”.

After a trip to Central Europe in 1988 with a friend who survived the Holocaust, Ms. Fishman developed the Jewish and Holocaust themes that she had already begun to explore. For some of the works she did around this time, she mixed her paint with ash she had picked up in Auschwitz.

These types of paintings set her apart from the original Abstract Expressionists.

“Unlike Ab-Ex, who, despite her nagging anguish, was largely apolitical, Ms. Fishman did not hesitate to introduce a topical experience into her canvases,” John Goodrich wrote in The New York Sun in 2006. .

Ms. Fishman has often ventured away from the brush, experimenting with different ways of applying paint and creating works.

“It’s an impulsive process,” she told Brooklyn Rail. “I’ll be on the street and just find stuff.” I won’t even know why I’m interested in it, but I’ll leave it in the studio, and sooner or later it’s either a tool, or it somehow gets used in paintings.

But his interests went far beyond the technical aspects of what could be done with a brush or a palette knife.

“Fishman’s work may be process-oriented,” Leah Ollman wrote in 2019 while reviewing an exhibition at the Vielmetter Gallery in Los Angeles for The Los Angeles Times, “but his process encompasses questions about self, culture and life. history as much as the materials, color and surface.

Exploration was a constant in his work.

“I consider myself a lifelong student,” she told the New York Times in 2000.

Louise Edith Fishman was born January 14, 1939 in Philadelphia. She had art in her genes: her mother, Gertrude Fisher-Fishman, was an artist, as was an aunt, Razel Kapustin. Her father, Edward, was an accountant.

She grew up in Philadelphia immersed in art thanks to her mother – sometimes she accompanied her mother to drawing lessons. Years later, she incorporated elements from two games she had played in her youth into grid paintings.

“One was the basketball court, basically a grid, and I knew my foot at all times in relation to the foul line and the half court line,” she told the Philadelphia. Inquirer in 2019, during an exhibition at Locks. Gallery in Philadelphia. “Same thing when I played bottle caps. You would run down the street with chalk, and then go down to the street and pull those bottle caps around these different boxes.

She studied at the Philadelphia College of Art and the Pennsylvania Academy of Fine Arts as well as the Tyler School of Art, which is part of Temple University. She received a bachelor’s degree in painting and printmaking and arts education from Temple in 1963, followed by a master’s degree in painting and printmaking from the University of Illinois at Champaign in 1965. She moved to New York that year and was already well in the abstract. Expressionism.

Over the course of her long career, Ms. Fishman has presented dozens of solo exhibitions and participated in countless group exhibitions. Her artistic forays included abandoning painting on canvas for a time in the 1970s and exploring aspects of traditional women’s crafts; in some works, she sewed strips of canvas together like a quilt.

In addition to Ms. Nyeboe, whom she married in 2012, she is survived by a brother, SJ Fishman.

Ms. Fishman bought a farm in upstate New York in 1987 and used it as a studio and second home. When a fire destroyed this studio in 1990, she spent time in New Mexico, regaining her balance and working with painter Agnes Martin. She began to imbibe Chinese philosophies and traditions, and her works from this period show elements of Chinese calligraphy.

She continued to impress critics into the new century.

“Ms. Fishman’s works are not what you would call serene,” Ken Johnson wrote in The Times in 2000, reviewing an exhibition at Cheim & Read in Chelsea. disputed between law enforcement and chaos. “