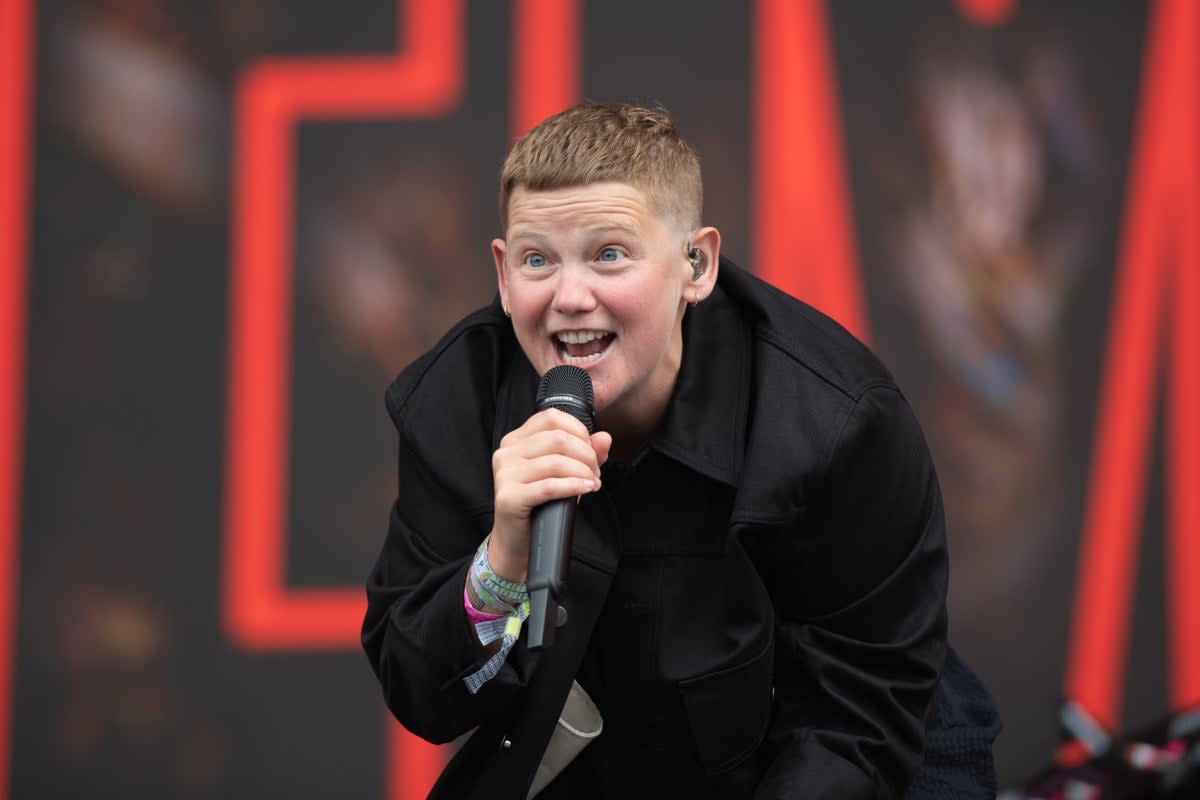 Kae Tempest cooks Worthy Farm with a bassline that simmers and bubbles underfoot. On their heavy January single “More Pressure,” everyone in that crowd serves as a tuning fork for the 36-year-old bars.

The poet-turned-rapper looks extremely comfortable. Their work contains strong contrasts, shifting noticeably from the aggressive to the emotional. Tempest is going hard – but they’re also insanely happy to be here.

“It’s such an important part of my summer,” they exclaim. “I’m so grateful to be here. Thanks thanks thanks.”

Like a gassed preacher in a black tunic, they pace the stage throwing hands at each other. Tempest is truly an artist whose work comes to life when performed live. They’re known for their state of the nation addresses, but that’s not all they think about today.

“Ketamine for breakfast!” The bad girls drank with it! Half naked in the bakery eating pastries! they purr on “Ketamine for Breakfast”. It’s meant to be a poignant moment of reflection on a chaotic past, but there’s no denying that Tempest could describe half the crowd’s ideal morning at Glastonbury. BB

“I think we are all reinventing the way the world works here at Glastonbury. Community, common space, wildness, paths to light. Pathways to love,” says Crowded House frontman Neil Finn. This is a band from the 1980s playing a set in the 2020s that could have been recorded in the 1960s.

Their catchy New Zealand mix of slightly psychedelic soft rock is a perfect pick for Friday afternoons on the Pyramid Stage, where the energy is just about enough for a healthy banger that brings everyone together. They succeed three times – just. The first, sung “Fall at your Feet”, lands a little shaky at first. But a rendition of “Happy Birthday” for singer Neil Finn’s brother and former bandmate Tim – who is back in Melbourne – soon has the crowd on firmer ground, relaxing their vocal chords.

Closer set “Don’t Dream It’s Over”, with its addictive chorus “Hey now, hey now”, bathes the site in the warm glow of a little festival moment. But it’s “Weather With You” that has everyone singing. “Wherever you go / Always take the weather with you,” sings the Glastonbury crowd, with some trepidation. And it’s not even raining. BB

Making their Glastonbury debut, Isle of Wight collective Plastic Mermaids are a joy to behold on the Crescent Nine stage. Musically they are almost impossible to define: a carnivalesque synthesis of jazz, folk, prog, psychedelia, electronic, indie and dance. There are video game noises. Vocoders. Keyboards. Trumpets. Maracas. Megaphones. Sometimes, like on the swelling, syncopated “1996,” from their 2019 debut album Suddenly everyone explodes, they will remind you of The Flaming Lips. At others, you detect traces of Arcade Fire and LCD Soundsystem.

But make no mistake: plastic mermaids are completely unique. “Something Better”, a new single from their upcoming album It’s not comfortable to know, proves they can pump pathos too, as charismatic frontman Douglas Richards, resplendent in a tangerine bowl haircut, laments in a piercing falsetto, “I miss my best friend.” A wonderful set. PS

Yes, there’s Wet Leg, of course, but there’s also Dry Cleaning – the other UK band with the deadpan cool sprechstimme – who start playing at the Park just as the British phenom finishes their set at the ‘Other Stage.

The group is about to release a new album, and the new single Don’t Press Me experiments with a glint of melody in its childish chorus. But for the most part, Shaw affects a limited range, and there are times when their music today feels a bit mournful. Their most upbeat tracks, “Strong Feelings”, “Magic of Meghan” and “Scratchcard Lanyard”, are always brilliant,

And Shaw can affect the distance, but she still has one of the cutest crowd talks. “Just to explain what I was doing then,” she says toward the end of her set, wiping her face after tapping the mic. “Sometimes lipstick gets on the microphone. and then sometimes I hit the mic. and then I end up with little bits of lipstick on my face. BB