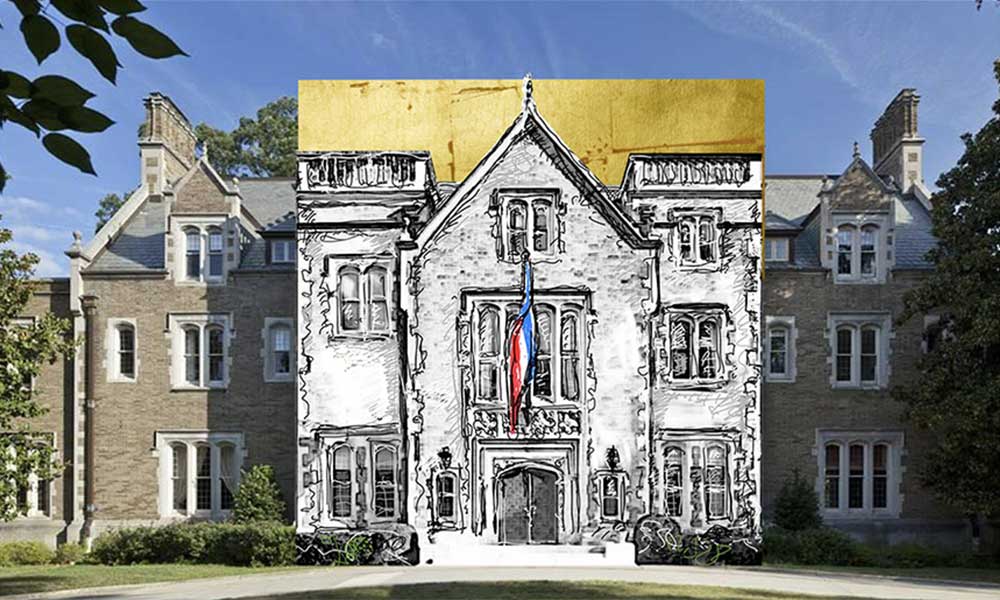 Born in Serbia, artist Simonida Perica Uth has called Washington, DC home for many decades. She comes from a long line of artists and has had an enduring fascination with French culture, art and architecture. “I love comparing architecture to the construction of the human body,” she said. “They both give us a glimpse into the secret of what time really is – the shape shifts, the way it morphs and expands – and yet there is an exotic memory of the past, like visiting an ancient temple.” Moment Arts Editor Diane M. Bolz recently interviewed Uth (who is a featured artist at Moment Gallery) about her latest project for the French Embassy.

I understand that over the years you have done a number of projects in conjunction with or for the French Embassy (La Maison Française) in Washington, DC and you have a very exciting new project. Can you tell me a bit about it?

The first time I was contacted by the Embassy was literally 30 years ago. They said they had a modest budget and wanted to know if I could do a set design. “We need a nice set design,” they said, “something artistic for July 14.”

So I said to myself: “What can I do with a small budget? And then I had a very modern idea. I borrowed three mannequins, you know the doll mannequins that you dress up with clothes. So I borrowed three, promising to return them in good condition. And then I wrapped them up like artist Christo would, in plastic, and spray painted them blue, white, and red. Then I had a guy make three wooden panels, and sprayed them blue, white, and red with a wavy line to look like a flag. And then I placed the painted mannequins in front of the “flag”. He looked wonderful.

I did several more drawings for July 14, and then got my first commission for an artwork, which was to do a painting of the coat of arms of Paris. This work is now part of the permanent collection of the Embassy and is displayed there today, right next to a work by Fernand Léger, which does me such an honor.

And what about the current project you are doing for the embassy?

Last February, the head of events at the embassy suggested to me that there would be some sort of contest coming up. They were looking for someone to paint the residence of the French ambassador, which was being restored. Scaffolding was going to go up all around the building and they wanted to make a curtain or a screen to hide it. They therefore needed a painting that could be reproduced, enlarged and printed on life-size canvas to cling to the structure of the scaffolding.

So I made a proposal, and I waited until May to find out that the ambassador had approved my sketch. Once I got that approval, I bought the canvases and other materials I needed. I split the painting into three square panels (36″ x 36″) because the building is very long and not that tall and also to make it easier to transport. I always have so much trouble with large canvases, because of transport. It is very expensive and the works are damaged. So I cut the image of the residence of the French ambassador into three pieces, so the painting is in fact a triptych.

And then I decided to make the three parts of the painting unique, because there’s not too much freedom of expression when you’re just doing a building, when it’s just architecture. I didn’t want to be too literal, too rigid, and just make the building look like a photograph, where everything is geometric, precise, and that’s it. I wanted to do something more creative. If not, why not just take a picture.

Then I decided to use a sheet of metal and represent the three sections as morning, noon and evening. For the morning, I chose silver leaf to symbolize that crisp, clean color – the cool, cool morning light. For noon I picked up gold, because the sun is at its zenith. It casts a nice golden shine on things. And then for the evening, the sunset, I used copper leaf – the pink, coppery, warm, deeper color signifying that time of day. The lighting or time effect is very French, in line with Claude Monet and his paintings of Rouen Cathedral at different times of the day.

The Ambassador’s Residence is a very unusual yellow brick with stone trim on the windows and doors. It’s a neo-Tudor style of architecture, but they also call it Beaux Arts. It is an eclectic architectural style. It was built in 1910 and designed by French-born architect Jules Henry de Sibour. There are also on each side, left and right, of the building beautiful old magnolias which I have included. My style is a mixture of Eastern and Western influences. For example, gold and silver metal leaf was used in Orthodox and Buddhist iconography. Why gold? Gold is a metal that does not oxidize. It is eternal. So there is a very transcendent feeling. I introduced copper as a new material in my work.

When you started working on this project, I assume you went to visit the building. Did you sketch on location, or did you take pictures?

I took a picture. For safety reasons and all, I couldn’t sit still drawing for long. I then drew up sketches based on the photography on my iPad Pro. And then I made a paint sketch overloaded with black lines. I love the French painter Gustav Moreau. He was the first to introduce line and drawing over paint. The painting deals with colored surfaces, not black and white. What I did, I took an even more obvious step. Moreau was a little tricky. I’m not picky about it. I really go black and white over color.

What type of paint and other materials did you use for this project?

For this particular project, I had to use acrylic and then added sheet metal. I only had a month to complete the three paintings. If I had used oil it would have brought me into a different style and would have taken longer. Acrylic gives me the best chance to do what I want to do with line and surface. There are basically five layers of different colors in the paint. If you want, for example (it’s an old Japanese technique), perfect white, you don’t paint white, you underpaint with red. Or with blue, or with anything.

Just so I understand, the procedure then is that the embassy will take your painting and enlarge it to actual size then print it on some sort of fabric or canvas?

It will be on a canvas that will be attached to the scaffolding so it will be hung right in front of the building in order to hide the scaffolding. It will likely be printed in sections or strips of canvas which will then be stitched together.

Exactly. This will cover the ugly scaffolding and create an artistic event.

And when do you think it will be installed?

I think it will happen in October.

Going back to your roots, did I understand correctly that your father was an artist and graphic designer?

Yes. So, I kind of followed his path. I graduated from the graphic department of the School of Industrial Design, a high school specialized in arts in Belgrade, and I went to the University of Fine Arts, also in Belgrade, where I obtained my BFA and then my master’s degree, which was in monumental Byzantine art. I actually had to build a wall – mix my own mortar, create the wall myself, then apply a mural. I also made a mosaic.

There’s another thing I wanted to ask you. If I understand correctly, your grandfather was actually in a concentration camp in Croatia during the Nazi occupation and managed to escape.

My great-grandfather, whose last name was Perica, was a judge on the Dalmatian coast and traveled from place to place. The Perica family, who were Sephardim, left Girona, Spain during the Reconquista and moved to Dalmatia. My great-grandfather first married a Czech lady, then a Venetian lady. So my grandfather, his son, grew up on the Dalmatian coast and lived there when the Nazis came. He and his half-brother, as Jews, were both put in a concentration camp. But they managed to escape and crossed Austria and Hungary, escaping by sleeping in cemeteries at night. Because people were afraid of cemeteries and didn’t look there. And both went to Belgrade, which was then a haven of peace. There, my grandfather worked in the government department for a minister from Yugoslavia, and he painted in his spare time. He loved art. And that’s how my father got interested in painting. When I was a child, my family celebrated Easter (my favorite holiday) as well as Orthodox Christmas and Easter, in secret because in communist Yugoslavia, it was not desirable to be religious. My interest in Judaism was sparked by David Albahari’s Serbian translation of Gershom Scholem On the Kabbalah and its symbolism. I have always been interested in the hidden meaning of symbols.

This is how you were born in Belgrade. What a fascinating story. One last question on the French Embassy project: do you think there is a chance that President Macron will see your art during his state visit scheduled for December 1st?

I hope so. I would be delighted if he did and I would like to know his reaction.

These 2 stocks are down 90% and may never recover