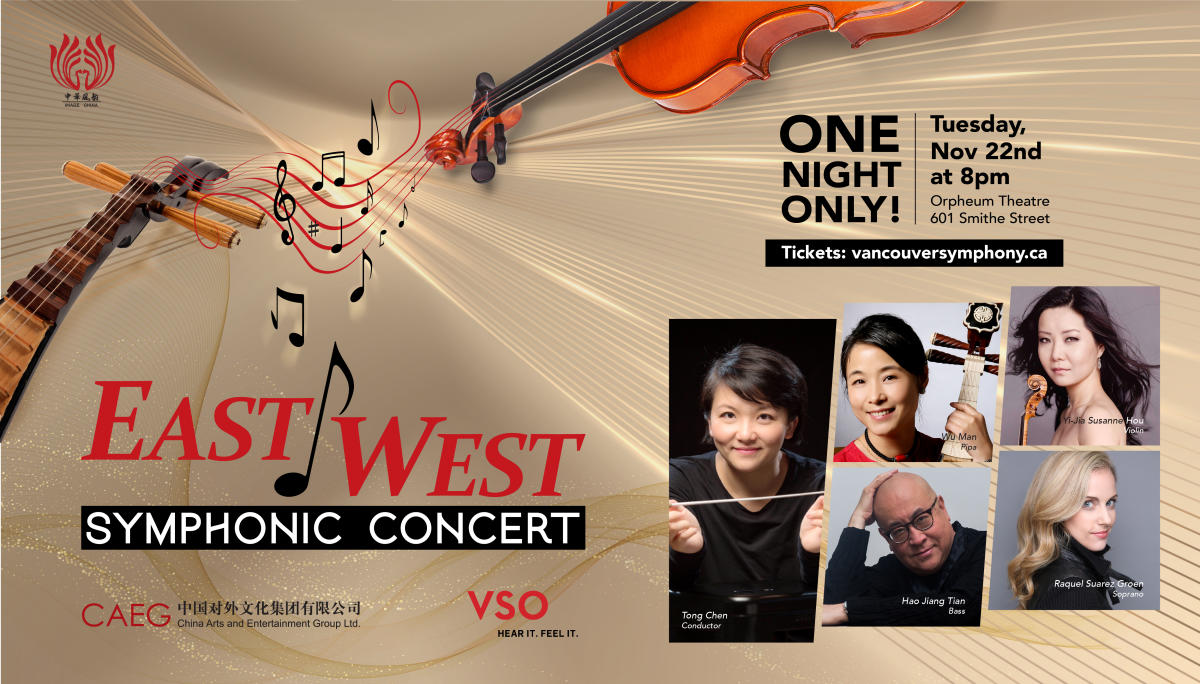 “This concert is a perfect blend of Chinese and Western masterpieces, including a special chance to hear the work of renowned Vancouver composer Jean Coulthard.” says Angela Elster, President and CEO of the VSO and the VSO School of Music. “The VSO is honored to welcome the Chinese community and symphonic music lovers to the Orpheum for what promises to be an unforgettable evening. Founded in 1919, the Grammy and Juno award-winning Vancouver Symphony Orchestra (VSO) is one of the three largest orchestras in Canada. The VSO has performed over 150 concerts each year in Vancouver and the province of British Columbia and has reached over 270,000 people annually, impressing audiences of all ages and backgrounds with its high quality and passionate performances. classical, pop and multicultural music.

“We are also delighted to cooperate with the Vancouver Symphony Orchestra to bring out the best in us. The fusion of Eastern and Western styles will fully reflect the artistic characteristics of musical diversity and inclusiveness,” said Tong Chen, the conductor of the East/West Symphony Concert. This century-old orchestra will be conducted by renowned Chinese conductor Tong Chen in Image China: East/West Symphonic Concert. As the winner of the prestigious Malko International Conducting Competition, Chen has quickly established herself as one of the most promising and exciting young conductors of her generation. She has worked with many orchestras around the world, including the Orquestra Sinfônica do Estado de São Paulo, the Orchester Symphonique de Besançon, the Orchester Symphonique de Leipzig. She is also a regular guest conductor of symphony orchestras throughout China.

For more information on programs and artists, please see the program and artist notes below.

The opening track Opera life is an excerpt from the soundtrack of the large-scale Chinese dance drama “Opera Warrior” which received an enthusiastic response when it premiered in Vancouver in 2016. The music will introduce local audiences to the essence of the rich historical and humanistic resources of Shanxi Province to convey the fascinating traditional Chinese culture and to celebrate the spirit of the Chinese people who are brave to embrace hardship and innovative change, drawing the audience into this celebration of exchange East-West culture.

Canada Mosaic Suite: Introduction and Three Folk Songs is the work of renowned Canadian composer and music teacher Jean Coulthard. One of a trio of female composers who dominated western Canadian music in the 20th century, Coulthard’s music is known for its deep emotion and purity of expression. This work was composed in 1974 when Coulthard’s composition gradually matured. This period also saw his creation of increasingly deep and complex works that fully demonstrate his mastery of form and musical content. Introduction and 3 Folk Songs is an extraordinary statement of his musical expression and compositional skills.

Composed in the summer of 2013 in Xi’an, Pipa Concerto No.2 by the famous Chinese composer Jiping Zhao is a work jointly commissioned by the Sydney Symphony Orchestra and six symphony orchestras in the United States. The performer Wu Man, recognized as the world’s first pipa virtuoso and the main ambassador of Chinese music, is an emblematic figure of crossover music and intercultural exchange. As Gramophone Magazine comments, “If one artist has become an ambassador for many artistic communities, it is the vibrant pipa master Wu Man. A force of nature in her own right, she is a key figure not only in bringing traditional Chinese music to new audiences, but also in becoming a muse for all manner of contemporary composers, from Tan Dun to Terry Riley.” Wu has always been a purveyor of Chinese music and an active advocate for the promotion and preservation of traditional music. Mr. Zhao mentioned that the concerto is indeed tailor-made for Wu since the work specifically takes advantage of the unique style featuring the pleasant-sounding Wu dialect and Su Hang Pingtan art from Wu Man’s hometown, and such a style also best reflects the rhythm of the pipa. Based on the traditional structure of the Western concerto, the work further explores the poetic expression of ideas and emotions, which enables it to stimulate the imagination on multiple levels of the audience.

The famous violin concerto Butterfly Lovers will be performed by the incredible violinist Yi-Jia Susanne Hou. Taking a romantic Chinese folk tale as its theme and Yue opera arias as its material, the music combines symphonic music with the figurative approach of Chinese folk opera music. It is the most famous violin piece ever written in China, realizing the genesis of the nationalization of symphonic music. Born into a family of musicians, Chinese-Canadian violinist Yi-Jia Susanne Hou has made a name for herself internationally, performing as a soloist with major orchestras in more than 50 countries. In 2016, she performed and recorded the violin concerto Butterfly Lovers with the Royal Philharmonic Orchestra and conductor John Nelson at Cadogan Hall, a work which she later toured in Canada and China.

After the poignant oriental love story, the famous baritone singer Haojiang Tian will sing the Non più andrai, an excerpt from one of Mozart’s most significant operas, The Marriage of Figaro. Tian is the only Chinese singer to have performed at the Metropolitan Opera for 20 years. He has worked with over 30 major opera houses around the world and as a performer of Chinese opera, Tian has achieved a worldwide reputation, respected in both the Eastern and Western opera worlds. As The New York Times wrote in a feature article on Tian, ​​”The reason for Tian’s success lies in his experience, and his experience itself is an opera.”
All I Ask of You from The Phantom of the Opera by musical master Andrew Lloyd Webber will be performed jointly by Haojiang Tian and Raquel Suarez Groen. Groen made her Broadway debut in the iconic role of Carlotta Giudicelli in The Phantom of the Opera which she has since played over 1000 performances in her 5 years with the company. Known for her fresh, bright voice and versatile performances of complex characters, Groen is a force to be reckoned with on the opera and theater stages and she has been invited to concerts around the world.

The grand finale of this concert is the classic song “On the Fields of Hope” composed by famous Chinese composer Shi Guangnan and it will be sung in Chinese by soprano Raquel Suarez-Gren. It is a song celebrating prosperity and through the praise of the fields of hope in their hometown, the song expresses people’s yearning for a better life, recreating for the audience the rustic countryside of the time and the harmonious image of people who aspire to prosperity and a better future.

The Image China Concert, a cultural exchange initiative presented by China Arts and Entertainment Group, aims to advance the best works of Chinese performing arts around the world and continuously enhance the international influence of Chinese culture. Since its establishment in 2009, it has selected more than 40 high-quality plays from more than 30 artistic troupes in China and presented more than 600 performances in mainstream theaters in countries such as the United States, Canada, the UK, France, Germany, Australia and New Zealand. The total number of spectators in various venues exceeded one million. Since 2021, Image China has appeared in major overseas theaters as co-productions. Besides the United States, other countries that have already held or will soon hold Image China concerts include Austria, France, Italy, Australia, New Zealand, United Kingdom, Germany and Canada.

Have you ever had a weirdly intense friendship? Tommi Parrish’s latest book is for you | Comics and graphic novels