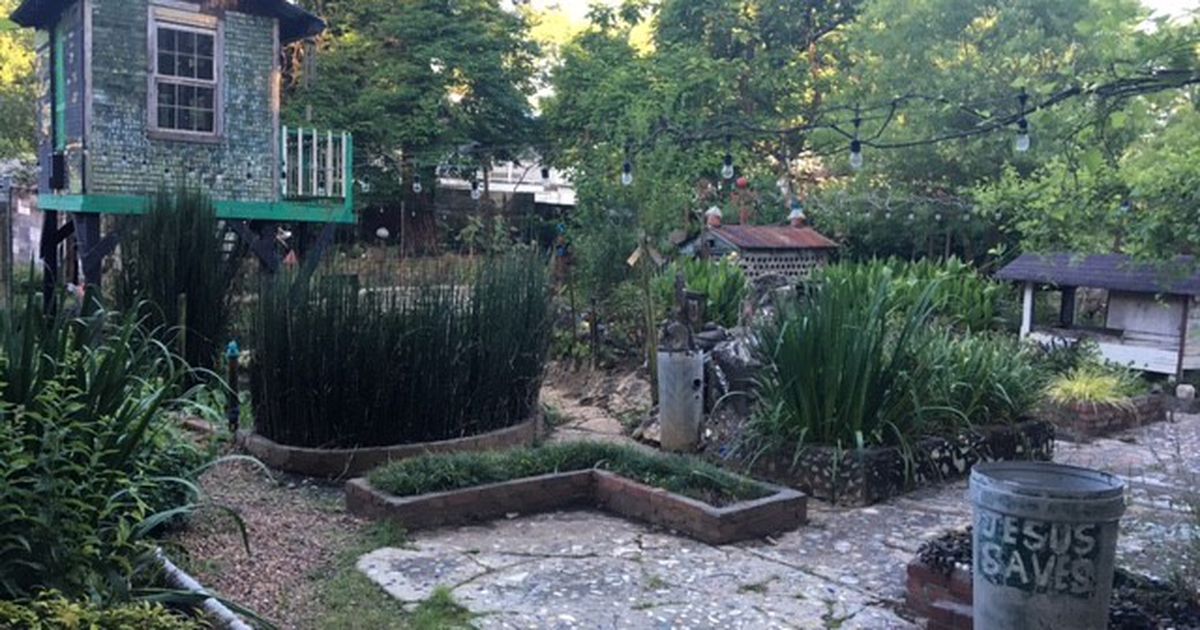 Having Paradise Garden to yourself is, well, paradise

There was the white Cadillac Finster received as a gift which is, of course, covered with his murals. On the side of the shed housing the car, Finster painted in big white letters: “DRUGS WILL SHORTEN YOUR DAYS AND MAKE YOU FEELING HEALTHY.” YOU DON’T NEED IT WITHOUT A PRESCRIPTION.

There was also the Meditation Chapel with semicircular windows, several mounted blocks of hand-painted Bible verses. A white coffin, originally intended for Finster’s remains but unused, sits at the front under a beautiful wooden cutout of an angel.

There are Bible verses painted by Finster all over Paradise Garden. He also had his own sayings: “TIME IS WAITING FOR NOBODY TO BE READY WHEN GOD CALLS,” he painted in large block letters on a siding near the entrance. “I never saw a person I didn’t like.”

I finally arrived at my favorite spot, a corner of the property with the beautifully restored, resplendent Mirror House on stilts. A climb up the stairs inside the shimmering structure puts you in another place and another time.

As a legal reporter, I had traveled 90 miles northwest of Atlanta to cover a hearing later that day at the Chattooga County Courthouse. But when I was walking through the gardens that morning, I felt so removed from pandemic life that it was exhilarating.

Finster, an evangelist, made a living repairing bicycles, televisions and lawn mowers. But one day, the then 60-year-old minister dipped his finger in white paint while fixing a bicycle tire. In interviews, he said that when he looked at the paint stain on his finger, God told him to paint sacred art.

Summerville’s Paradise Garden, an outdoor arts environment created by the late folk artist Howard Finster, is overseen by the Paradise Garden Foundation, which was among the recipients of Georgia Council for the Arts grants announced on Monday. Photo file

A sign on Finster’s longtime exhibition at the High Museum of Art indicates that he was one of the most prolific artists in history. He created 46,991 signed and numbered works of art between 1976 and his death in 2001.

Paradise Garden, a few blocks from US 27 and spanning four acres, was his creation. It’s filled with concrete walls and mounds encrusted with almost any object you can think of, be it a coffee cup, plates, shards of glass, ceramic moldings, plastic toys, sculptures, etc. 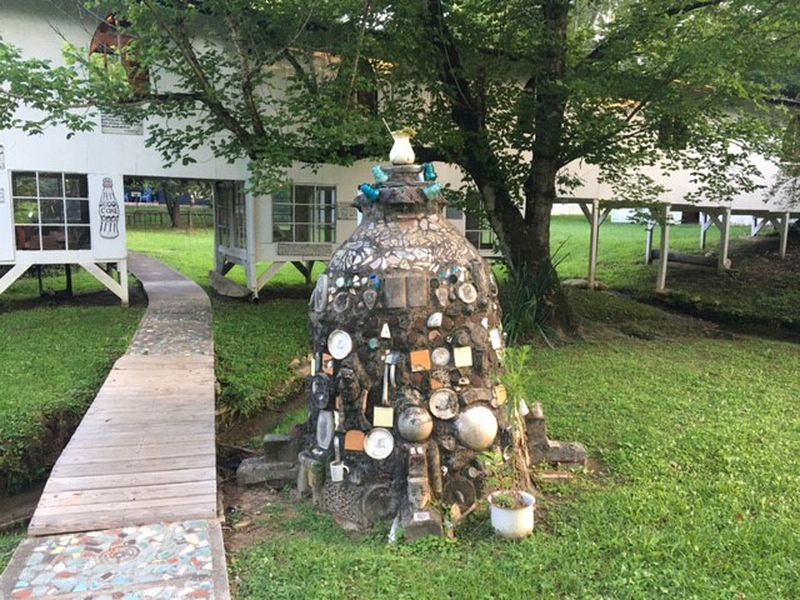 One of the many concrete mounds that folk artist Howard Finster has placed around Paradise Garden. He encrusted them with all kinds of materials. (BILL RANKIN/[email protected])

“I built the park because I was commanded by God,” Finster said. “I started the garden in 1970 about 30 meters in the backyard, built a cement walkway and set up a transport shed, and started exhibiting the inventions of mankind. My park is a memorial to inventors.

Paradise Garden, which has welcomed around 50,000 visitors over the past decade, decided five years ago to provide a guest suite in a yellow cottage opposite the main entrance.

Three years ago, the tourism division of Georgia’s Department of Economic Development gave the nonprofit Paradise Garden Foundation a grant which it used to convert an office into an adjoining suite in the Yellow Cottage. A year later, the national tourism agency gave Paradise Garden another grant, which it used to build a two-bedroom, one-bathroom bungalow across the land. 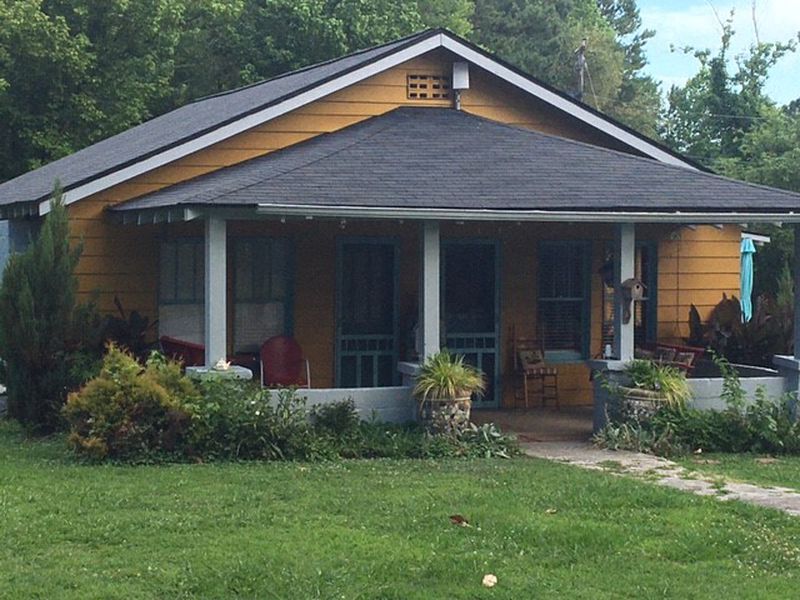 The yellow cottage with suite n ° 1 (on the left) and suite n ° 2 in front of Paradise Garden. Available on AirBnb, a stay in the suites gives visitors 24/7 access to walk around the grounds of folk artist Howard Finster’s incredible four-acre creation. (BILL RANKIN/[email protected])

The three options, all available on AirBnb, provide an added bonus: free access to the garden park, especially in the mornings and evenings when you might have the place to yourself. When not rented, the two suites and the bungalow serve as artist residences.

Each location has its own charm, with eye-catching artwork, comfortable furnishings, and distinctive arrangements courtesy of local builder Eddy Willingham and interior designer Summer Loftin of Atlanta. 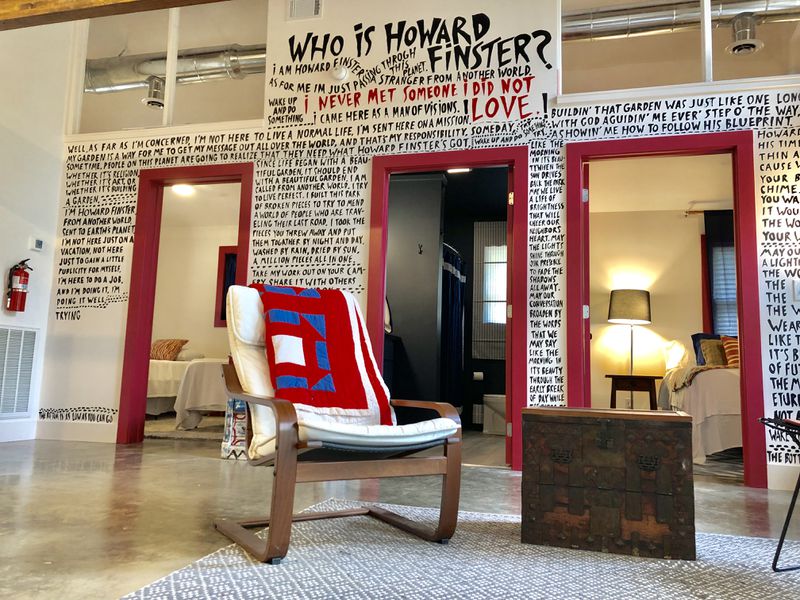 A photo of what’s known as the Bungalow, one of three AirBnb places to stay in Paradise Garden, the four-acre creation by folk artist Howard Finster. The “Who is Howard Finster?” wall was designed by interior designer Summer Loftin of Atlanta and features many of Finster’s writings and thoughts. (Photo courtesy of the Paradise Garden Foundation)

All AirBnb profits go to the day-to-day operations of the non-profit Paradise Garden, allowing the garden to remain open to the public year round. (The grounds are closed to the public for maintenance on Mondays, but the suites and the bungalow are still available on these days.)

My stay in suite # 1 was great. The one bedroom, one bathroom has a fully equipped kitchen that I can cook my own meals. The biscotti cookies, mints and nuts waiting for the guests were a nice touch. Offers of eclectic games and interesting books were also on hand.

What sets the place apart are the artwork, including a beautiful painted wooden cutout of a donkey on the living room wall by an artist who must adore and emulate Finster. Painted on the Blue Donkey is the folk art church of the world under a starry sky. A painted wood cutout of Loretta Lynn by another artist stared down at me in the bedroom.

Nearby attractions include Cloudland Canyon with its spectacular views and Sloppy Floyd State Park, where you can launch a canoe or kayak for a descent of the scenic Chattooga River. The garden is also close to downtown Summerville, which is full of restaurants and shops. Paradise Garden suites and bungalows are often booked on weekends, but if you plan ahead, there should be no problem making a reservation, said Tina Cox, executive director of the non-profit foundation.

“If you are looking for something that is an interesting experience, this is what you need,” said Cox. “There really is nothing like it. “

I couldn’t agree more. And I will come back.

IF YOU ARE GOING TO

As of now, on AirBnb, you can book either of the two adjoining suites in the Yellow Cottage at $ 131 per night or the Blue Bungalow at $ 197 per night, plus tourist taxes and service charges.

There is plenty of parking and the condos are easily accessed by entering a combination on a lock box to get the keys.