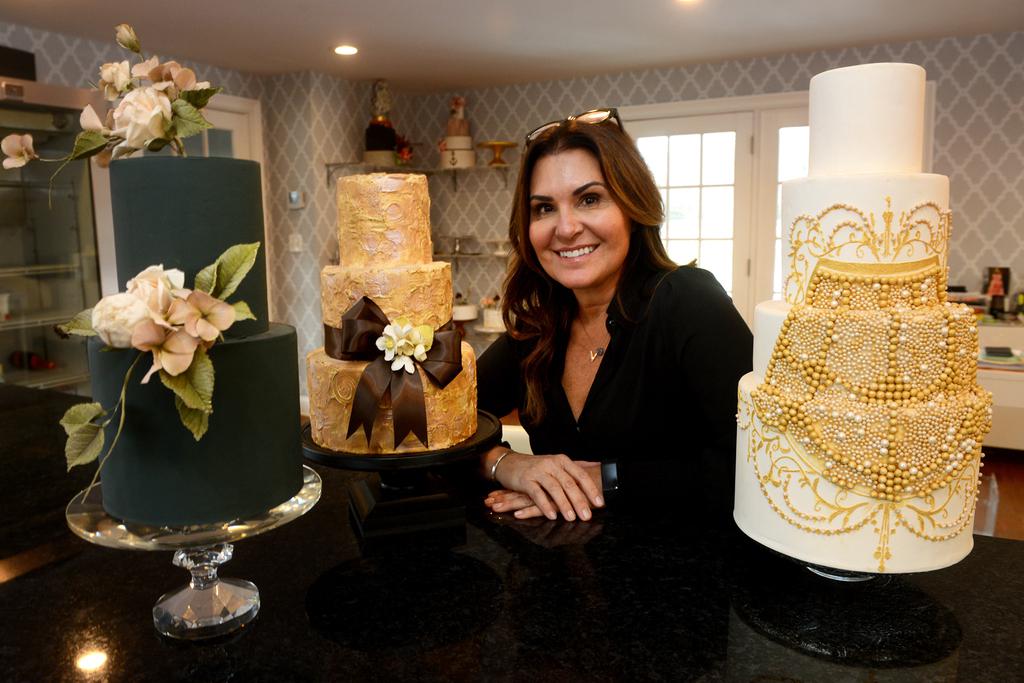 Owner of But a Dream Custom Cakes, Palatiello turns icing into something dreams are made of — or at least her customers’ dreams.

From the delicate, detailed sugar flowers that look startlingly real down to the stamens, to the universal Amazon “cardboard” box with her familiar markings — customers are often afraid to cut into her masterpieces, she said. note.

And then there are fantastic cakes, like her tongue-in-cheek Tiger King cake that she baked “in the heart of COVID” in early 2020 because she was bored of being stuck at home and all her orders from cakes were cancelled. She and her two sons had watched the hit Netflix series.

“Of course I had to do the Tiger King,” Palatiello said with a grin.

She ended up with a fully rendered bust of the Tiger King himself, made entirely out of sugar and cake. Her teenagers eagerly recorded the ceremonial cut of the confection as a soundtrack played in the background.

During the shutdown, she also baked a cake that looked like a roll of toilet paper, a nod to the scarcity of household necessities – the cutting and serving of which was also the subject of a video. Inspired further by the pandemic, Palatiello even baked a prickly COVID ball cake.

This year, her themes are more cheerful, seasonal and nuptial.

A recent creation was a cake that looks like a hand-knitted blue winter hat with two “ceramic” cocoa cups on a tray, all lit up with fairy lights. The paintings looked so realistic that some revelers were a little puzzled.

Her friend and client Antonia Kellner, the recipient of the cake, noted that a few guests couldn’t seem to resist stealing the holiday dessert.

“A few people went to get the [cups’] handles and I had to put a sign on it,” Kellner said. “It was hilarious. It was the centerpiece that day.

With visions of cakes in his head, Palatiello often works on engineering issues when designing something delicate. That’s part of why his company is called But a Dream Custom Cakes.

It’s just part of the lyrics of the song “Row, Row, Row Your Boat”. She explained, “Life is just a dream.”

And above all, “It also rhymes with buttercream. So that’s where I found it,” Palatiello said.

“I make all kinds of cakes,” she said, “It’s the ones that look like something else that really grab everyone’s attention – whether it’s the snow hat or an Hermès bag. , a stack of pancakes – those things always blow people away.”

Palatiello even has a special category called “gravity defying cakes”. One of these cakes is a bowl of spaghetti and meatballs, with a plastic fork suspended in the air with melting “pasta” flowing from it.

While unusual cakes can be a fun problem-solving exercise for her, Palatiello said she loves the romance of baking a wedding cake.

“But I think my heart is really in the wedding cakes,” she said.

“I love making someone’s big, beautiful and imposing wedding cake. It’s the cake of a lifetime,” she added.

“It’s probably the most expensive cake they’ll ever buy” and the most photographed one. “And certainly one that makes all the sense,” she said.

Palatiello noted that after the big day, the sugar flowers can be saved and made into a keepsake for the couple.

“They can last forever,” Palatiello said. “The bride can take them and put them in her china cabinet and keep them forever.”

Coup had real flowers on her wedding cake by Palatiello, a special almond cake frosted with almond buttercream that she said her guests still talk about six years later.

“I’ve never had such a taste of cake before,” she said.

Coup was so impressed with Palatiello’s craftsmanship that she chose to have Palatiello’s signature floral sugar embellishments on the cake at her gender reveal party when she was pregnant over 10 years ago. a year. She is now working with the pastry chef for an Alice in Wonderland themed first birthday cake.

Coup added: “You usually see pictures of very fancy cakes and you think, ‘Oh, they can’t taste so good, they must taste awful. But her cakes are amazing.

Palatiello’s cake business is not just about making spectacular cakes.

In her gleaming commercial kitchen built on the side of her house on Tanner Marsh Road, Palatiello offers lessons in cake design, what she calls “sugar school”. These are aimed at aspiring pastry chefs, professionals looking to take their skills “to the next level” and basic courses for the home baker.

Palatiello said she enjoys connecting with other “bakers” and loves mentoring other bakers.

At Sugar School, she plans to offer instruction in how to work with sugar flowers, an advanced level course. She also had home bakers ask her for “buttercream bases.”

“There’s a pretty steep learning curve” to working with fondant, she admitted, so this wouldn’t be a beginner’s course.

Pastry was something in Palatiello’s DNA. As one of four girls in her family, she practically grew up with a mixing bowl in her hands.

She went to fashion design school and then worked for a sportswear company in New York. She uses her fashion sense to design cakes – drawing on her knowledge of proportions, colors and textures, she said.

And then there are the obvious riffs – high-end designer shoe cakes and Tiffany & Co. blue boxes.

After 9/11, Palatiello moved to Connecticut and started baking for her two growing boys, Michael and Vincent, who are now 17 and 15 respectively.

“I started making their birthday cakes. My eldest, when he was little, had a lot of food allergies. Michael was allergic to eggs and nuts.

“I started making his egg-free, allergy-free cakes so he could have them,” she said.

“It became my creative outlet,” she said. “I started giving them to my friends and made their kid’s birthday cake so my son could go to the party and have some – instead of bringing two Rice Krispies treats,” a- she said laughing.

“I loved the challenge of making fun cakes for the kids. It kind of developed where people I didn’t even know were asking me to make their kid’s birthday cake.

“I decided I could make a business out of it – seven years ago I took the plunge,” she recalls.

“There are many different substitutions you can use for eggs in baking,” she said. Gluten-free was also a big movement, “There’s such a big demand for it.”

Although she wouldn’t advise making a big gluten-free wedding cake. Instead, she would make a much smaller cake without wheat flour to accommodate gluten-intolerant guests.

Palatiello’s baking for his own children has given him the expertise and confidence with gluten-free and egg-free baking.

“If I didn’t have that experience, I would probably avoid them,” she said.

Dairy-free cakes, meanwhile, are harder to make: “It’s the hardest to fake,” she said.

“Gluten-free baking has come a long way,” and she said she “definitely” can whip up a “delicious, moist cake.”

Palatiello was largely self-taught on gluten-free and egg-free baking. “I joke that I went to YouTube University,” she said. “We had a lot of trial and error.”

But the wedding cakes are the real challenge for her. Although they can take two days or more to complete, the most demanding aspect is the protection of their creations during delivery.

“My biggest cake was a seven-tier wedding cake, which I had to drive all the way to County Litchfield to put it together,” she said. “They’re just too heavy, I had to bring them in three pieces – it’s not even a two-person lift.”

Her cakes “can easily weigh 25 pounds per tier.” Delivery and setup therefore require muscle and a lot of planning.

Using insulated cake carriers, she must deliver the cakes as if they were as fragile as eggs – no accidents allowed.

Controlling the temperature of your vehicle is also vital, otherwise the masterpiece will melt along the way.

When traveling long distances, “I had the AC blast in my car” with the cake wrapped in ice cream. In the middle of summer, she can be seen wearing a heavy coat. On a hot day in July, she says, “because it’s as cold as possible, I’m wearing a winter coat.”

Delivery is “definitely the most stressful part of what I do”.

“I drove them all the way to Boston, to Manhattan,” she said. “I’ve never had an accident – knock on wood.”

“I have a saying: only two people should touch the cake: the one who made it and the one who paid for it. No one else should be involved in transporting the cake.