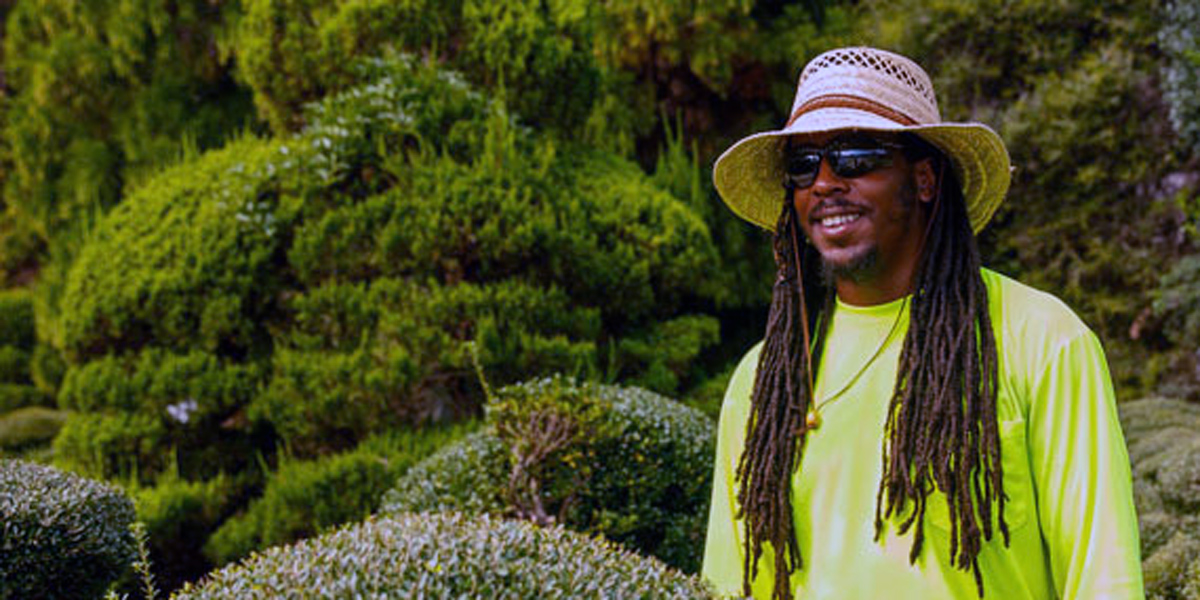 In 2014, Mike Gibson was proud of his “property art” – sculptures he carved from the foliage of trees and shrubs – so he showed his father some photos of his work.

“I made a huge sculpture that I think is a game-changer,” says Gibson, who was living in Ohio at the time. “I thought no one else was doing this sort of thing.”

But his father set the record straight. It is not “the art of property”, it is topiary. And Pearl Fryar of South Carolina was the king of the topiary.

Gibson therefore made a pilgrimage to Bishopville, South Carolina, to see the Pearl Fryar Topiary Garden in person. He walked the well-worn trails through the 3-acre garden, following in the footsteps of countless schoolchildren, vacationers and budding topiary artists who had sought inspiration there. He spent hours talking to Fryar, known as the country’s leading African-American topiary artist, and learning about his techniques.

“I fell in love not only with Pearl, but also the topiary.” Gibson said. “Seeing his sculptures in person and meeting him, and seeing how he did it, inspired me even more.” 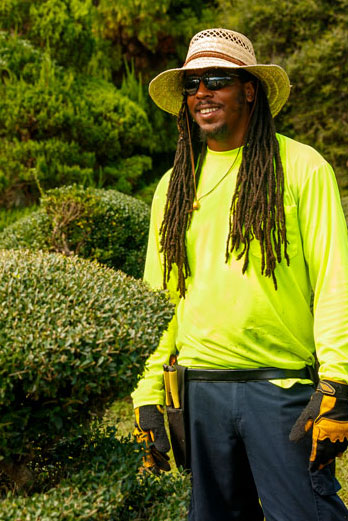 Mike Gibson is the Topiary Artist in Residence at the McKissick Museum at the University of South Carolina.

Today, Gibson spends a lot more time in Fryar’s garden. With a pair of shears and the occasional use of electric hedge trimmers, he cuts pieces of holly bushes and trees to refine their shape. Gibson is the topiary artist in residence at the McKissick Museum at the University of South Carolina, and his job is to restore Fryar’s living sculptures into the form that thousands of visitors from around the world have enjoyed for years.

“It was kind of the loop that I even had this opportunity,” Gibson says. “He is a direct inspiration for my work and the work I have done over the years.”

So how did Gibson, an Ohio landscape designer and topiary artist, end up renovating a garden in the South Carolina countryside on behalf of a museum at the state’s flagship university? To answer this question, you must first understand what the garden means to people everywhere.

Fryar first saw topiary art while serving in the US Army during the Korean War, and he later decided to experiment with it himself. In the mid-1980s, he began making topiary sculptures on his property in South Carolina, often transplanting disposable plants from local nurseries, nourishing them for health and cutting branches to bring his ideas to life.

The swirling shapes and whimsical designs of the living trees caught the attention of visitors. The garden’s message – love, peace, and goodwill, expressed in larger-than-life letters made from garden beds – also caught on.

“It was really inspiring,” says Bettye Scott, a longtime friend and former neighbor of Fryar. “I have personally witnessed a lot of time and effort that he put into it. Because of this transformation, people from all over the world have come to see this garden. “

Fryar has been on national television and in major gardening magazines, and his garden has become a global tourist stop. Fryar’s art can also be seen on the streets of Bishopville, at the State Museum in Columbia, and on the South Carolina campus. Fryar and its garden were the subject of an award-winning documentary in 2006, A man named Pearl. Shortly before the COVID-19 pandemic, Fryar was in talks with the Atlanta Botanical Garden to make topiary sculptures there.

“The legend should be kept alive because of what he was able to do,” Scott says. “We should work hard to maintain it because of the impact it has had on the nation.”

But as America grappled with the COVID-19 pandemic, Fryar’s health declined with age. The 81-year-old topiary artist speaks in a neutral tone.

In November 2020, Jane Przybysz, director of the McKissick Museum in South Carolina, received a phone call from a teacher who took the students on field trips to Fryar’s garden and was concerned the garden was overgrown. Because the museum had worked with community gardens in Colombia, the teacher wondered if Przybysz could help Fryar with his garden.

Neither Przybysz nor her team are topiary artists, but she immediately wanted to help. In his mind, it’s more than a garden. It is a monument to African-American resilience in shaping the landscape of the South.

Members of the Bishopville community also came to several town halls to express their hopes for the garden’s long-term viability.

Put it all together

A grant from the Central Carolina Community Foundation enabled the museum to support garden revitalization efforts. Przybysz contacted the Atlanta Botanical Garden, who agreed to help. In March 2021, they dispatched staff to carve out some of the topiary carvings that needed immediate attention. Gibson was there that day, revisiting the place he loved so much (since 2014, he had been back there several times, including once to propose to his wife). When he saw crews working on restoring the garden, he picked up a set of shears and started helping.

Przybysz drove from Columbia to Bishopville to meet Gibson, who was excited to get involved.

“I started it, how can I be part of this project? What do I have to do to be part of it? Gibson said.

This summer, Gibson moved his family from Ohio to South Carolina so he could focus full time on Fryar’s Garden. Even moving at a good pace, it will take a full year to restore the garden. After that, he plans to focus on ongoing maintenance. He will also teach topiary techniques to people in the Bishopville community inspired to follow in Fryar’s footsteps.

“I see this as a long-term project,” he says.

But people are already noticing the work in the garden. Gibson recently sent Przybysz a photo showing Fryar at the door of his house giving a lecture to a group of students, and a group of Chinese tourists contacted to schedule a visit for 2022.

Przybysz says she hopes the renewed attention to the Fryar Garden will lead to long-term solutions to preserve it for years to come.

“It’s the right thing, it’s the right time, and Mike is the right person to lead it,” says Przybysz. “He considers himself a protégé of Pearl. He is passionate about what Pearl has done and wants to preserve his legacy.

Share this story! Let your friends on your social network know what you read

‘Arsenic and Old Lace’ opens at the Weekend Theater

Virgil Abloh, artistic director of Louis Vuitton and founder of Off-White, dies of…

Vermont books to consider as the holiday shopping season arrives