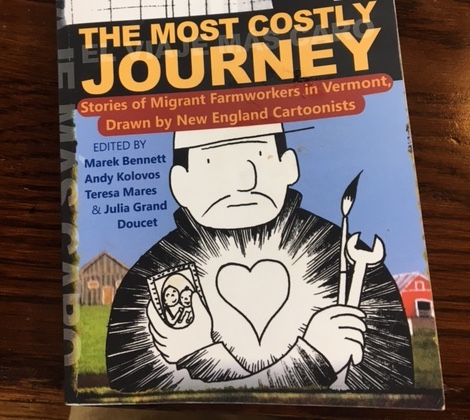 David Moats: ‘The Most Costly Journey’ tells the stories of migrant farm workers

Jose’s journey through the desert from Mexico was dangerous. During the night, a rattlesnake bit one of the migrants in her group, and the group’s guide – their coyote – forced them to leave her to die in the desert.

Another migrant died in Jose’s arms after being bitten by a spider. When Border Patrol agents descended on the group inside the United States, Jose and the others scattered into the desert.

Juana also crossed the desert on foot, where she was forced to drink water from puddles, straining it through her shirt to avoid ingesting insects. His first job in the United States was at a Sonic Burger in South Carolina. Later, she worked in the tobacco fields of Kentucky. At that time, she was pregnant and her aunt had told her there were better jobs in Vermont.

Now she and her husband live on a dairy farm in Vermont, where he works 12 hours a day, seven days a week. Juana is thrilled that in Vermont they can get medical care for their children, and she has found companionship with other women through a gardening project. Their eldest son has joined them, but their daughter is still in Mexico.

Juana says, “My heart will forever be split between two places.”

Carlos worked on several farms in Vermont, sometimes losing jobs because of his drinking problem. He is able to send money home, but is sad to have missed his daughter’s 15th birthday celebration, and misses the music he and his family played together.

Alcoholism is a disease, he says. It feeds on loneliness. There’s a lot of work in Vermont, he says, but he hopes his kids won’t have to come here like him.

For most Vermonters, the state’s migrant farm workers are an invisible population. There are between 1,000 and 1,200 of them, and the state’s dairy industry depends on them. But they mostly live in isolation, reluctant to be noticed by immigration authorities or the police.

Due to their isolation, they are also often invisible to each other.

That’s why Julia Doucet, outreach nurse at the Open Door Clinic in Middlebury, decided to help them share their stories with other migrants. Mental health issues caused by isolation and cultural dislocation had become a concern, so she collected their stories, told in Spanish, into pamphlets to distribute to workers.

Now Vermont’s invisible population is becoming more visible. The Vermont Folklife Center, in conjunction with a number of other organizations, has published 19 of these stories, translated into English, in a book called “The Most Costly Journey”. The stories are told in the words of the workers themselves, incorporated into comic strips by some of the region’s most accomplished comic book artists.

The Vermont Reads selection for 2022

“The Most Costly Journey” promises to become a major cultural event in Vermont. That’s in part because the Vermont Humanities Council chose the book as its Vermont Reads selection for 2022. That means libraries, schools, book clubs, government agencies, and others across the state will embrace the book as a center for reading and discussion.

Vermont Humanities has 3,500 copies to distribute to readers.

In a preface to “The Costliest Journey,” author Julia Alvarez writes, “Deep within the migrant community lies its own powerful resource: storytelling. A story can cross any boundary, including the often very well-guarded boundary between self and others, us and them. It is portable, easy to transport across deserts and oceans, languages ​​and cultures. »

Alvarez, who came to the United States from the Dominican Republic, is full of appreciation for the migrant community. “Who else would want to milk our cows, grow our food, process it, cook it and serve it? Who would feed and bathe our viejitos in nursing homes and hospitals, take care of the ninitos in daycares and preschools? She says, “We need stories to help us come home to the circle of our common humanity.

Two of the editors of “The Most Costly Journey” point out in an afterword that the workers were consulted at every stage when their stories were put into book form. The publishers want to assure readers that no cultural appropriation was involved in the creation of the book.

The migrants’ words are raw and truthful, and the artists’ illustrations highlight their power. The storytellers are protected by the use of pseudonyms, but the authenticity of their stories is evident.

Each migrant took a different route to Vermont. Alejandro was born in Georgia, so he is an American citizen, but he lives with his father, Felix, works in Vermont and dreams of the day when both of them can return home to the state of Chiapas.

Jesus fled the robberies, kidnappings and extortions caused by Veracruz gangs. The requests for money didn’t stop even after he arrived in Vermont, and he thanks God for the strength to keep going.

To each his own fight

A common theme among storytellers is how much they miss home – parents, brothers, sisters. Many have spent years in Vermont, but they live apart from their families because they want to help them, sending money home that will allow parents to buy a house or improve their lot.

The sacrifice and commitment of the workers echoes the stories told of past migrants who endured hardship and loneliness after arriving from Italy or Ireland, Poland or Greece.

Each individual has their own battle. Jose expresses his pride in the work he does on the farm in Vermont, but he says how much he misses home. Then one day he is gone and the publishers of the book are unable to complete the story. No one knows where he went.

Other migrants talk about the importance of learning English, getting a driver’s license or working hard and learning how to do farm work. A farmer named Bob, who has hired a worker named Carlos, says, “I have a lot of respect for those guys from Mexico. They go through hell to get here and that’s it for their families. These guys are ready to work – they want to work! Don’t assume they’re stupid or inferior to you because they don’t speak the same language.

Vermont is not on the front line of immigration from Mexico, but immigration is not new to the state. Previous generations saw the arrival of the first waves of immigrants, and today those early immigrants, along with the Native Americans who were here first, make up what Vermont is. It is impossible to conceive of Vermont without appreciating the mixture of peoples who formed the state.

Journalist and historian Howard French, who has written about the central role of Africa and Africans in shaping what we call the New World, has described the importance of “Creole” culture wherever diverse cultures meet . By that, he means more than the mix of black and white commonly known as Creole in New Orleans or the Caribbean. It means the vibrant mix of people open to each other – a jazz orchestra or a fiesta of Mexican music and cuisine.

In fact, hundreds of people traveled to Middlebury and elsewhere to consume the food of the immigrant cooks. Organizations have sprung up to drive farm workers to appointments and provide for their medical needs. The waiting room of the Open Door Clinic, which serves people without insurance, is a lively bilingual place, Creole in the noble sense of the term by Howard French.

“How Comics Can Be Used”

In creating the new book, important institutions in Vermont rallied to the cause of the state’s migrant population. The project started with the Open Door Clinic and benefited from the help of Teresa Mares, an anthropologist at the University of Vermont. Mares brought in the Vermont Folklife Center and Andy Kolovos, a folklorist and archivist at the center.

Kolovos described himself as “an old-fashioned comic book nerd” and friend of Marek Bennett, one of the cartoonists who added a whole new dimension to migrant stories. As a folklorist, Kolovos said he wanted to “explore how comics can be used to tell ethnographic stories.” In fact, comics are popular in Mexico, and the farm workers were happy to participate in the graphic representation of their stories.

By making “The Most Costly Journey” its Vermont Reads selection, Vermont Humanities is expanding the community by welcoming some of its newest members.

Graphic novels and comic book art are evolving as a serious form of storytelling, and as an expression of the humanities – and our common humanity – “The Most Costly Journey” is an important contribution.

Did you know that VTDigger is a non-profit organization?

Our journalism is made possible by donations from our members. If you appreciate what we do, please contribute and help keep this vital resource accessible to everyone.

Tickets sell out fast as venues welcome back audiences