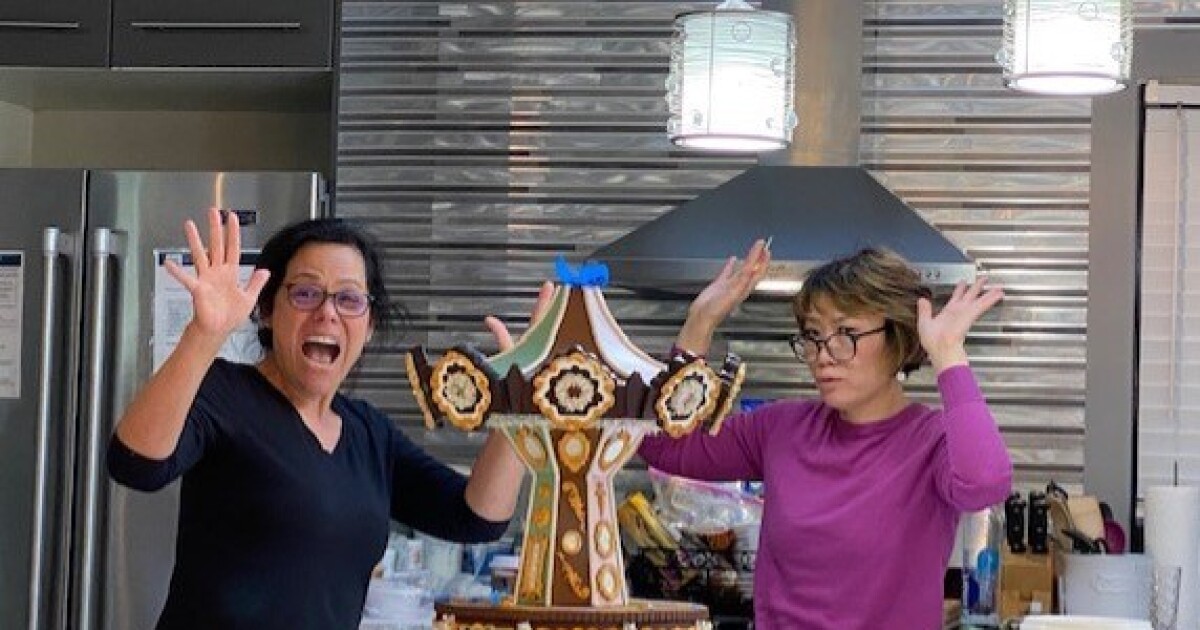 The national gingerbread house competition in Asheville, NC is the Olympics for the art of gingerbread, the cream of the crop.

Evonne Darby is a newcomer to the art of sugar, but she embraced it with a relentless passion. The corporate PR specialist-turned-part-owner of Escondido bike store is part of a team that won the 2021 Gingerbread House title on November 22 at the historic Omni Grove Park Inn in Asheville.

The Merry Mischief Bakers ‘triumphant’ Christmas ‘Around the World’ gingerbread carousel was inspired, in part, by the Seaport Village and Balboa Park carousels, which team members visited and studied in last May.

Their winning confection will be on display at the Omni Hotel during the holiday season and throughout next year – a drool-worthy attraction drawing tourists from near and far. â€œIt’s a huge honor,â€ says Darby.

From Nov 28 to Jan 2 all gingerbread creations will be on display throughout the hostel, which sets up a gingerbread mockup of the hotel for visitors to browse in its great room.

This confectionery depiction of tiny ornaments for sale and mischievous tiny elves is on its way to Darby’s house in Rancho Bernardo to live out his retirement life in his family room.

After moving away from corporate life and co-opening a bicycle supermarket, the Bike Bling boutique, Darby began taking baking lessons. She had been bitten by the sugar bug 30 years earlier when she made a wedding cake for a friend.

She began traveling the world to attend culinary events and take cake decorating classes with renowned pastry chefs. During the San Diego Cake Show, she begged high-end pastry artists Ted Scutti and Adam Starkey to give her a private lesson at her home. And they did.

Soon she began to host other sugar art instructors, transforming her family room into a classroom filled with utensils and cooking supplies. Darby’s Sugar Prep Studio was born.

â€œInitially, I wanted to make my own birthday cake for my grandchildren,â€ she says.

Darby has joined Gingerbread Team captain Scutti and Starkey, who work in the company for the contest. The team also includes a Scottsdale, Ariz. Restaurant manager Tim Stewart and Sachiko Windbiel, the only one who makes a living from the art of sugar.

Their mission was to make a 100% edible piece measuring no more than 24 inches and telling a story. The judges included Food Network’s Carla Hall and chef Nicholas Lodge, who teaches at the International Sugar Art Collection school in Georgia.

Darby’s team members started exchanging ideas in January. Each had a mission and began their work at home. Darby and Windbiel, who live in Santa Monica, joined their three teammates in Phoenix to begin assembly.

A mold had to be created for the 1,000-inch-wide ginger clay planks that form the floor of the carousel.

Darby ordered acrylic designs to hold his piping and mini rose designs in place until they could be carried and added to the gingerbread carousel.

A member designed special foam wrap to wrap delicate structures and support hanging pieces during the flight to North Carolina.

They had to buy two more plane tickets to hold two boxes, one containing the top and the other cradling the bottom of the carousel.

One box caught the attention of TSA inspectors who instructed them to remove the sculpture from the carousel and place it on the x-ray conveyor belt and through the plastic flaps, causing a 45-minute delay for repackaging .

The five-person team checked 10 suitcases and carried an additional 10 bags to get all the gingerbread components to Asheville.

They rented a neighboring house with a large kitchen for three days to complete the assembly.

The humidity prompted bakers to scramble to find a dehumidifier to keep their gingerbread from absorbing moisture and warping.

Their finished creation contained 66 handmade sugar sculptures, including 15 animals representing the seven continents and 44 elves from around the world. There were 1,000 branches of embossed paper.

â€œI love that each figure has different facial expressions,â€ says Susan Rotante, Marketing Director of the Omni Inn. “The level of detail was insane.” She says the 360-degree design tells the story in all directions.

Sachiko’s two cats, Quincey and Phoebe, were among the characters, and hiding in the roof as a lucky charm were a few pieces from their grand prize winning entry from the previous year. Five gingerbread cookies, one representing each member of the team, lined the stairs of the carousel.

Scutti estimates that they spent 2,000 hours on the project which includes 2,500 individual parts and that it took four months to design it. Five full-scale 3D models were built into a foam core prior to construction to ensure the design would run like gingerbread. More than 100 custom models were needed to produce the carousel, he says.

“We are only the second team to have won twice,” Darby notes.

The Merry Mischief Bakers received $ 5,000 and various gifts, courses and baking tools. â€œWe easily spend a lot more than we earn,â€ says Darby. â€œWe don’t do it for the money. We do it to improve our skills.

The bakers will be back next year. They have already booked the same rental house. This will be the 30th year of the competition and the team hopes to be the first to win the grand prize three years in a row.

Review: A Neapolitan rhapsody in “The Hand of God”