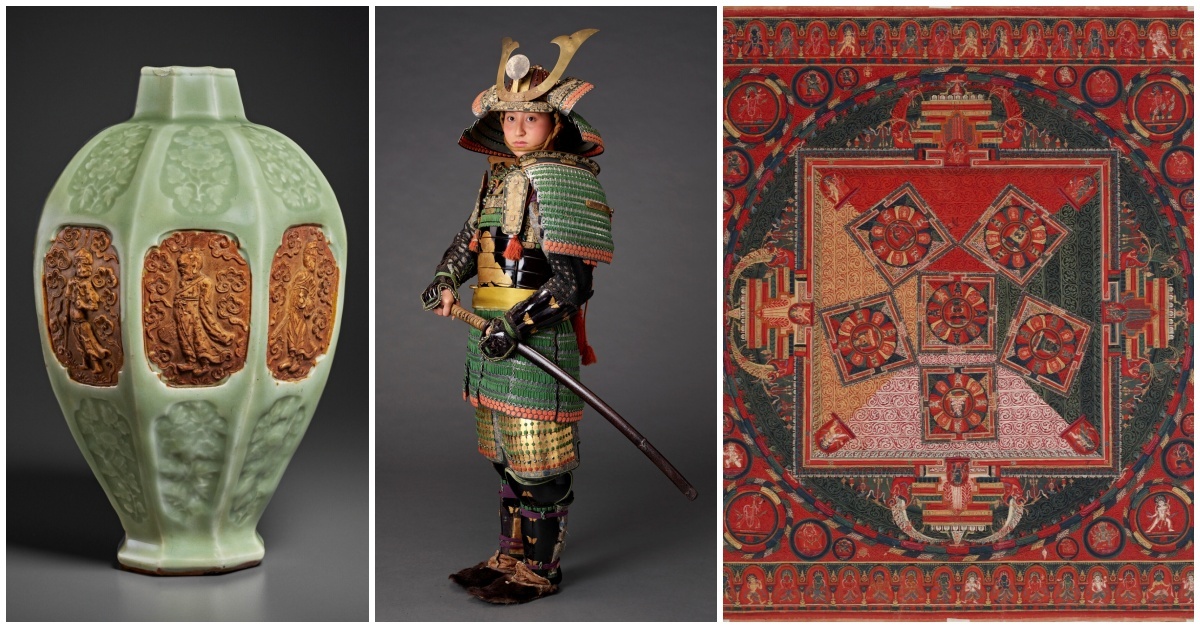 Christie’s will hold nine fine art sales – five live auctions and four online auctions. Some of them are part of prestigious collections such as John C. and Susan L. Huntington, Romi Lamba and David Drabkin. Also, works of art such as ceramics, Buddhist sculptures, paintings, and Japanese and Korean art are included.

Here is an overview of the sales, as well as the flagship lots:

A traditional sale during Asia Week in New York, it features various Japanese and Korean works, including samurai weapons and armor, as well as Japanese swords from the Kaisendo Museum collection.

Leading the sale is a 12th-century Korean celadon-glazed stoneware ewer. Alongside this work, there is a 16th-17th Century Katana with Legendary Swordsman The name of Nagasone Okisato Nyudo is engraved on it and Japanese armor from the 18th and 19th centuries.

In this sale, Himalayan and South Asian works of art by two eminent scholars of the history of Buddhist and Asian art – John and Susan Huntington – are featured.

Together, the American couple contributed to these scholarly fields for 40 years as professors at Ohio State University. The most expensive lots are two Tibetan works – a 15th-16th century mandala painting, as well as a figure of Vajrakilaya and wife in gilded bronze.

Born in India and educated in the United States, Lamba moved to Hong Kong in the 1990s. Built up over 30 years, its collection offers works by 20th century artists from the South Asian subcontinent.

In this sale, works by modern and contemporary masters such as Arpita Singh and Maqbool Fida Husain are featured. Many paintings are auctioned for the first time and largely unseen in public.

Another traditional sale during Asia Art Week is modern and contemporary art from South Asia. Featuring works from the 20th and 21st centuries, the highlight includes Untitled (Citadel with flag) – a landscape painting by the eminent Indian artist Francis Newton Souza.

Arpita Singh | A woman with another woman

Sale: Centering the Figure: Modern and Contemporary South Asian Art from the Collection of Romi Lamba

Six-character seal mark in underglaze blue and from the Yongzheng period (1723-1735)
Sale: Important Ceramics and Chinese Works of Art

Created in the 14th century
Sale: Important Ceramics and Chinese Works of Art

Pair of Huanghuali Horseshoe Back Armchairs

Created during the 17th-18th century
Sale: Important Ceramics and Chinese Works of Art

This season, this traditional online sale offers a diverse range of works – such as Japanese woodblock prints by Kasane Hasui and Utigawa Hiroshige, as well as a 19th century Korean two-tier chest. With most lots estimated at around US$10,000, this sale is suitable for new art collectors.

In addition to the live auction, this sale also focuses on Buddhist art. Leading the sale is a 12th century Indian bronze figure of Namasanghiti Manjushri.


Thoughts Across the Water: Asian Art from the David Drabkin Collection (Online Sale)

An American lawyer and avid art collector, Drabkin first traveled to India to study before staying in Hong Kong and Japan. During his travels, he developed a passion for Asian art and collected a wide range of works – mainly comprising Chinese artworks, Chinese paintings and Japanese art.

Highlights include a 16th-century monumental landscape attributed to Wang Shichang, a Jichimu corner-legged table, and Kano school screens. The most valuable lot in the sale is a Chinese painting attributed to the 13th-century painter Qian Xuan.

This online sale ranges from ceramics and jades to textiles and landscape paintings. A pair of 19th and 20th century Imperial famille rose vases with yellow and purple floral motifs are the highlights of the sale.

Created in the 15th-16th century
Sale: Thoughts Across the Water: Asian Art from the David Drabkin Collection (Online Sale)