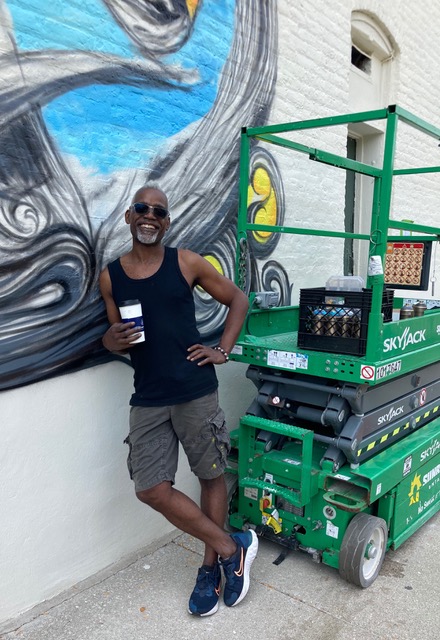 At the northwest corner of Green Bay Road and Central Street, a mural depicting the birds of Evanston is nearing completion.

The Evanston North Shore Bird Club is partnering with the Evanston Wall Art Program to honor the area’s birds whose populations may decline due to climate change and habitat loss. The mural, titled “Birds of Concern,” features three Evanston birds: the red-headed woodpecker, the American kestrel and the black warbler.

Libby Hill, acting president of the North Shore Bird Club, said the idea for the mural was hers, but the impetus came from a friend who told her about Audubon’s murals in New York City. Hill then watched a virtual tour of these murals and they became the inspiration for Evanston’s mural. The concept then went to the board of directors of the North Shore Bird Club, where it was enthusiastically received.

Hill then contacted Lea Pinsky of the Evanston Mural Arts Project. Founded in 2017 by Pinsky and her artist husband, Dustin Harris, both of Evanston, EMAP operates under the auspices of Art Encounter, a well-established non-profit arts organization in Evanston. Pinsky is currently the executive director there, following in the footsteps of her mother, artist Joanna Pinsky, one of the founders.

“EMAP’s goal is to uplift and beautify neighborhoods with mural art through creative partnerships with community organizations, schools and business districts, pairing professional artists with members. community and youth to create large-scale public works of art, ”according to the EMAP website.

One of the first tasks in making a mural is establishing its location and a budget. EMAP contacted three business districts looking for a wall, Pinsky said. Paul Barry of Evanston Neighborhood Properties presented his building at 1901 Central St. and its highly visible eastern wall. Barry generously contributed to the cost of repairs and preparation of the necessary walls.

“Our commitment is to make this community a more beautiful place. The color, the art, all of them bring community pride and a sense of commitment to one another, ”said John Quinn, Facilities and Capital Project Manager for Evanston Neighborhood Properties. “It was important for us to make sure the artist had a canvas on our building that will stand the test of time. It was a significant expense, but we are sure it is worth it. “

Besides the North Shore Bird Club, other donors to the mural’s budget are the Central Street Evanston Art Encounter and the Evanston Arts Council.

The “Birds of Concern” project was in the works when Angela Shaffer, Executive Director of Central Street Evanston, took office in September.

“It adds to the vibrancy of the neighborhood and I look forward to other art projects in the future,” Shaffer said.

“The new walls for the murals are chosen with care, for their visibility and permanence,” Pinsky said. Evanston has many underground passage walls that would benefit from murals. But building walls are generally safer than underpass walls because the latter are hold back walls where moisture can pass by causing white streaks called efflorescence.

However, Pinsky said they haven’t had any such issues since 2018. They have “learned to avoid walls that can degrade and are exploring alternative methods” for installing murals. Costs can vary widely. Underground passage murals are often quite large and complex, so generally more expensive than building murals.

“There is a five-year maintenance clause in the contract with EMAP,” Hill said. This is important because the climate in the Chicago area is harsh on exterior painted surfaces. In fact, the Evanston Arts Council has the power, by ordinance, to remove a mural if necessary, usually due to serious deterioration.

“A bus on Green Bay Road recently stopped at the corner light and everyone on the bus leaned in with their cameras to photograph me and the mural,” Slang said.

“It made me feel really good,” he added.

“I was obsessively drawing from the age of 3 or 4 and I was always encouraged by my mother,” he said.

In 2016, Slang painted three bird murals in Rogers Park, joining several other artists in their depictions of endangered birds. Pinsky and Harris managed the Mile of Murals at the time, along Ravenswood’s elevated railroad tracks, before establishing EMAP. These birds were also part of the Audubon project.

There will be a permanent descriptive plaque on the wall near the mural. The educational branch of the Bird Club produces bookmarks featuring the mural and providing more information on the birds photographed, bird conservation and our environment.

GlobalFoundries, controlled by Abu Dhabi, files for IPO due to chip shortage