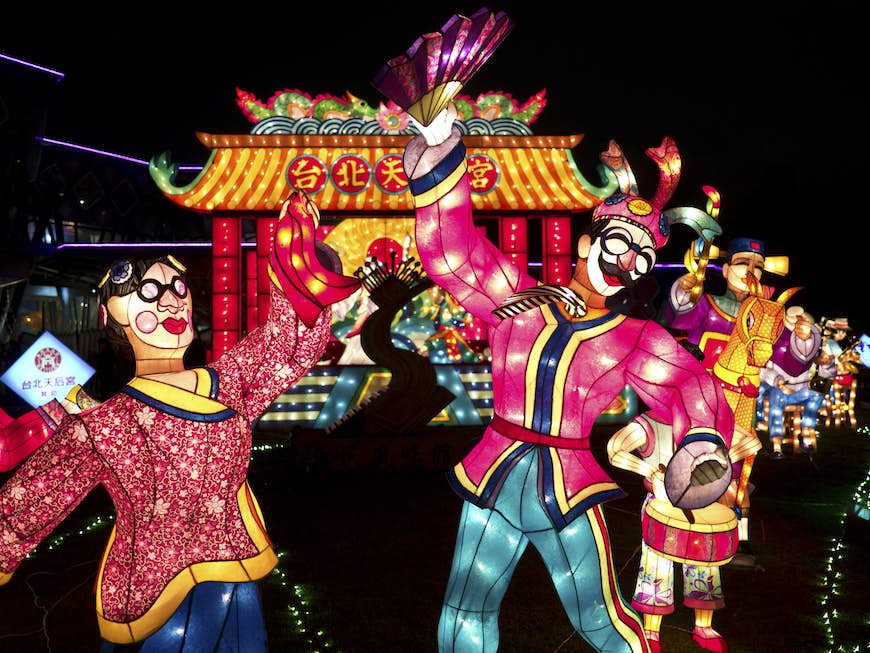 On the edge of the tropics, east of China and southwest of Japan, the tiny island of Taiwan is full of promise – and a bit of traveler’s sweat.

In the capital, Taipei, the four seasons merge into two and the calendar changes to lunar logic. It’s humid and hot for much of the year, with peak temperatures and crowds from July to August.

But whether you visit during the warmer months of the year or the slightly cooler months, there’s still plenty to do – from festivals and hikes to beaches and biking.

Get the scoop on the latest cultural happenings all over the world delivered weekly to your inbox with our email newsletter.

For parties and nautical activities, visit in high season (July-August)

July to August is high season, but with summer temperatures exceeding 30°C (86°F), you won’t want to spend long wandering the streets of Taipei. Instead, head to the nearest body of water for surfing, snorkeling, and diving experiences. At the end of the afternoon, the heat drops and the parties begin.

Visit in low season for an outdoor adventure (November-March)

The low season offers a cooler setting for outdoor adventures such as hiking, biking, and hot spring hunting, if hot and humid isn’t your bag. Winter in Taipei can be a bit chilly (between 13 and 18°C, 55 and 64°F), but adventurous travelers will appreciate the cooler air when hiking the Pingxi Crags or biking through Pingling.

Blink and you’ll miss them, but there are actually four seasons on display in Taiwan. The short-lived spring (March and April) is when the forested mountains surrounding Taipei bloom pink and white, while in the fall (October-November), the forests turn rusty red. With such exposed natural beauty and more comfortable temperatures (19-22°C or 66-72°F in April), the shoulder seasons are perfect for getting out.

Chinese Lunar New Year is Taiwan’s biggest public holiday and lasts for a week at the end of January. In truth, Taipei becomes a bit of a ghost town during this time, when restaurants and shops close and city dwellers head south for family reunions.

Try to arrive in the days before, visit the crowded Dihua Street and Nanmen markets, and consider staying at the Grand Hyatt in anticipation of the annual Dragon Dance on New Year’s Day.

In mid-February there are several lantern festivals to choose from across Taiwan, but the Pingxi Sky Lantern Festival is the largest and closest to Taipei, where lanterns are released along the charming old railway line that passes through the old town of Pingxi.

March is best for flowers and cycling

Winter is long gone, but summer isn’t near yet, making March the best time to visit Taipei for outdoor adventures. Avid bikers tend to start circuits around the island, while surfers head to the east coast.

March is also the best time to see cherry blossoms, although you can continue to enjoy them well into April at higher elevations, which provide opportunities for colorful hiking on Yangmingshan.

Be artistic in April

A selection of major art and design events kick off in the spring, with several cultural parks competing for local picnickers and art lovers. Of these, Huashan 1914 Creative Park, Taipei Expo Park and Songshan Cultural and Creative Park all host a hodgepodge of independent design shops, art galleries and independent film showcases, complete with weekend markets. outside.

Go to the beach in May

As the weather gets warmer, the sages will head straight for the coast. Baishawan Beach to the north of Tamsui and Fulong Beach to the east are less than an hour from Taipei by bus, with Longdong on the rocky northeast coast ideal for cliff jumping and snorkeling in fish-rich waters.

Marking the start of the monsoon season (June-September), the forecast for June may seem like a nightmare, but dodging the rain is possible. Watch out for darkening skies, pack a sturdy umbrella, and aim to finish your outdoor activities by early afternoon.

Taipei celebrates its Romance Day on the seventh day of the seventh lunar month. Head to Daocheng Pier (Dadaocheng) between Dihua St and the Tamsui River for fireworks atop shipping containers that double as bars and food stalls.

Don’t whistle after dark in August

Marking the opening of the gates to the underworld, Ghost Month is Taiwan’s most chilling Taoist tradition. During the month, people are expected to refrain from inauspicious activities such as whistling after dark, and Tao believers hold rituals and prepare sacrificial items (fresh fruits and snacks usually, but very occasionally whole pigs) in front of their local temples to promote good fortune. . One of the most exciting events is the Grappling with the Ghosts pole climbing competition held in Yilan on the last day of the month.

September is ideal for a barbecue

A 2,000-year-old tradition marking the harvest festival and the brightest full moon of the year, the Mid-Autumn Festival is celebrated casually in modern Taiwan with families lighting up their barbecues on the edge of the road while children run around with pomelo skins on their heads.

Take to the streets for October’s Gay Pride Parade

The first Asian destination to legalize gay marriage, Taiwan hosts the largest LGBTIQ+ celebration in the region. Taipei’s annual LGBT Pride Parade sees some 100,000 supporters and activists take to the streets around City Hall, culminating in Halloween-Pride mashup festivities across the city, including Yuanshan’s Maji Square and the red house of Ximen.

Enjoy the mild but sunny month of November

November offers plenty to do for those who love the outdoors, both inside and outside the city. Choose one of the best day trips from Taipei or hop on your bike to explore the Taipei Riverside Bike Path. You can also hike Yangmingshan, ending with an illicit night swim in Bayan Hot Spring.

Watch the Taipei 101 fireworks in December

On the heels of Christmas, when young Taiwanese gather for German markets and gifts, New Year’s Eve is another international holiday that people in Taipei can’t help but embrace.

Enjoy the fireworks extravaganza of Taipei 101 as you get up close with the crowds around the Sun Yat-sen Memorial and Xinyi shopping district, or better yet, get a vantage point atop Elephant Mountain , arriving early for the best views.

What to know about pre-approved car loans