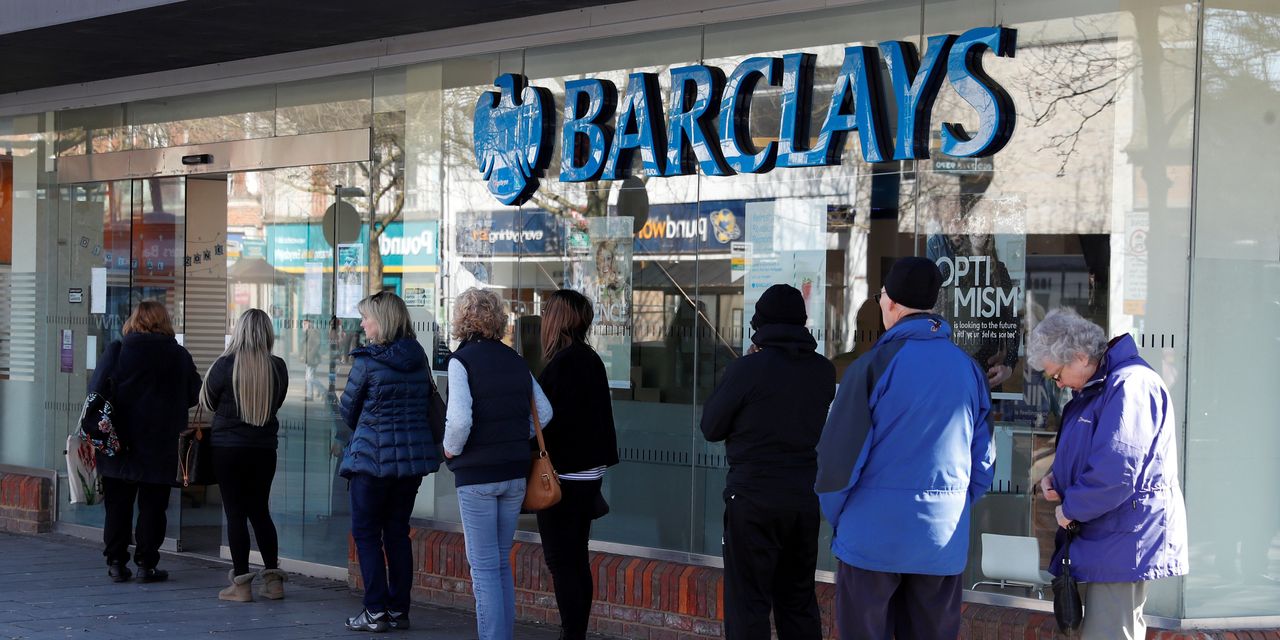 Mr. Staley said the results demonstrate the value of diversification. “We want to make sure this bank is positioned to enable recovery and be a firewall as we face the economic challenges brought on by the pandemic,” he said.

Sherborne Investors did not immediately respond to a request for comment.

Barclays shares were trading around 7% around noon in London.

Revenues for the Markets unit, which trades fixed income, stocks and derivatives, climbed 77% to 2.42 billion pounds ($ 3 billion) in the first three months of the year. year compared to the same period last year. Revenues at the UK unit Sherborne called the bank to focus on fell 4% to £ 1.7bn in the first quarter. Sherborne said it holds the largest stake in Barclays, with 5.8%.

Barclays net profit fell 42% to £ 605million as the London-based bank set aside £ 2.1bn in provisions for loan losses hit by the pandemic. Provisions for bad debts in the first quarter of last year amounted to £ 448million.

“The charge was funded in part by outstanding performance in the markets,” Jefferies analyst Joseph Dickerson wrote in a note to investors, referring to the charge for bad loan provisions.

Banks around the world are increasing provisions to account for the impact of the virus on businesses and the economy. America’s biggest banks have taken billions of dollars in new credit provisions. HSBC Holdings PLC, Europe’s largest bank by assets, set aside $ 3 billion in the first quarter.

Standard Chartered PLC, a London-based bank that makes most of its revenue in Asia and Africa, said on Wednesday it set aside $ 965 million in the first quarter, more than 10 times more than a year earlier.

The virus is the latest challenge for banks in Europe, which have been hampered by low and negative interest rates which have made lending particularly difficult.

Economic conditions are more difficult than the 2008 global financial crisis “to some extent,” Staley said. “Given the uncertainty surrounding the developing economic slowdown and the low interest rate environment, 2020 should be difficult.”

“You will see the full effect of this in the second quarter, so there will be some kind of downward pressure, especially in our consumer business,” said Morzaria.

In contrast, the outlook for the business unit remains strong, he said.

“Our trading revenues are much higher than in the second quarter of last year,” said Mr. Morzaria.

In March, Sherborne called on Barclays to withdraw support for its U.S. CEO, who is running for re-election at the bank’s annual meeting. Sherborne said he would vote against him.

Then, on April 16, Sherborne said that “with great reluctance” he will now only withhold his vote on Mr Staley’s re-election due to the challenges the bank is facing due to the coronavirus pandemic.

“We continue to believe that Mr. Staley did not exercise the level of judgment befitting a director or senior executive of the company,” Sherborne said on April 16.

Mr Staley said on Wednesday he did not have an update on the regulatory investigation. The investigation is ongoing, an FCA spokesperson said.

The Barclays chief said he was focusing on leading Barclays through the pandemic and preparations for the reopening of the bank’s offices across the world. The return will be gradual and social distancing between staff will remain a priority, he said.

The bank’s headquarters are located in a skyscraper in London’s Canary Wharf financial district.

“How many people can work in this building if you limit the number of people in the elevator to two at a time?” It’s that kind of calculation that will determine how you’re going to deploy that, ”said Mr. Staley. “I think the idea of ​​putting 7,000 people in one building may be a thing of the past.”