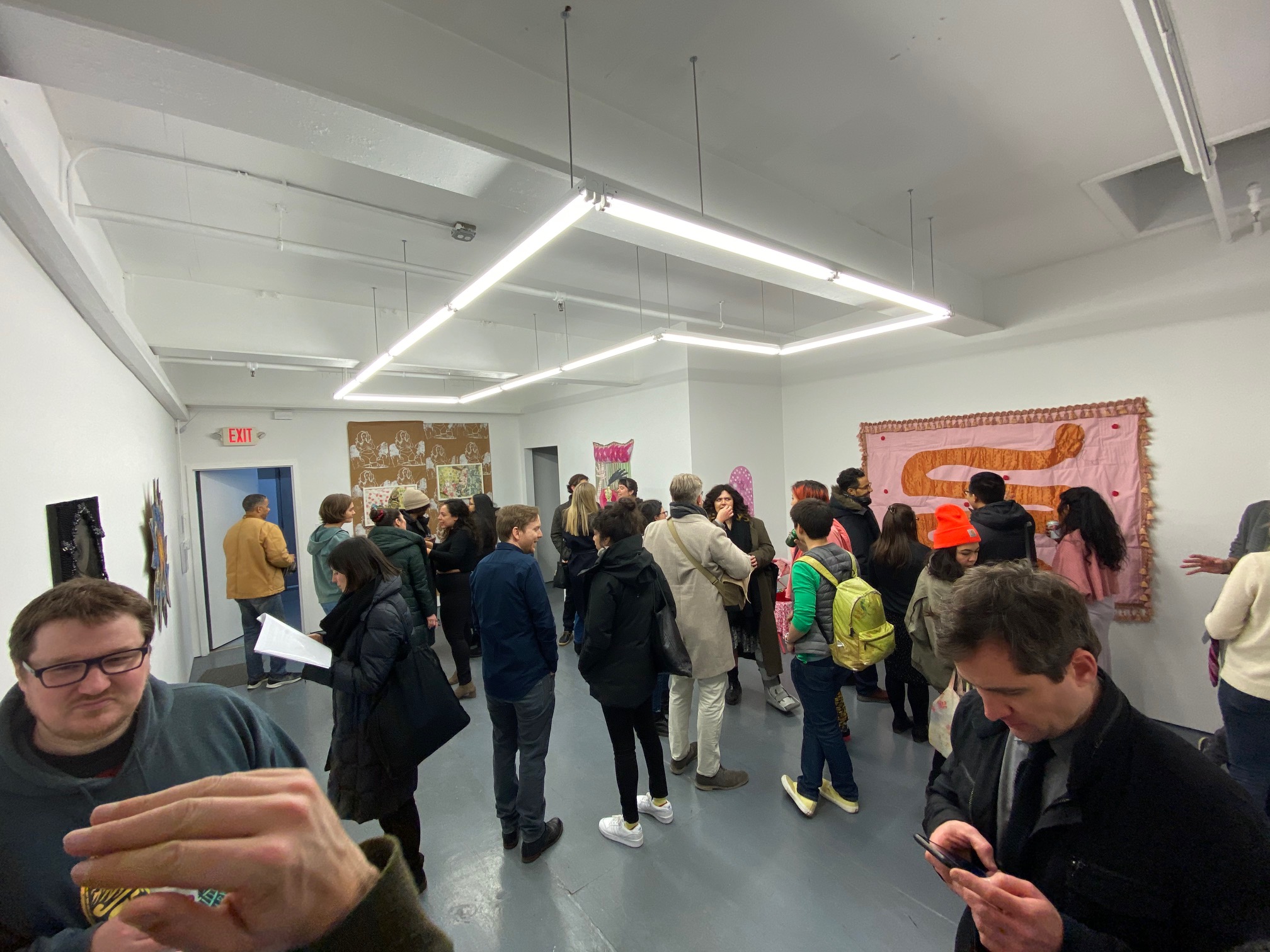 Are the days of lavish gallery receptions over?

Years ago, on Thursday evenings, the streets of Chelsea were abuzz with critics, curators, artists, collectors and young people in their trendiest outfits, all walking in and out of gallery openings. And then the COVID-19 pandemic arrived.

As a former gallery assistant during the pandemic, across the city on the Lower East Side, I helped orchestrate the shadow of these events that still existed. Every few weeks I would wipe out the ice bucket, buy bags of ice from a nearby bodega, order delivery from San Pellegrino, and draw wine from the back room.

Then I walked to Whole Foods on Bowery, following the gallerist’s instructions on what the artist might want (“He’s got a sweet tooth — maybe buy madeleines?”), and buy some fancy cheeses. I then picked up the white tablecloth from the laundry, set up a folding table and arranged the food on serving plates in the back room.

At 6 o’clock in the afternoon, I took my post. Friends of the artist, friends of the gallery and passers-by came through the doors and up to my table, where I poured them water or wine in plastic cups.

The ritual seemed archaic. During these pandemic openings, there were very a few random visitors abusing the open bar which makes my role as wine regulator even more useless. As a recent graduate student from what seemed like a world apart, Manhattan art openings were completely new to me, but everyone who walked through the gallery doors seemed to know exactly how these gatherings worked. My gallery has continued to adhere to a traditional open format, even during the pandemic, despite low attendance.

When COVID-19 became a reality, galleries closed and their explosive openings came to a screeching halt. And while restaurants, bars and music venues have reopened, crowded, wine-fueled gallery openings have remained a thing of the past.

Today, some galleries are re-examining the way they structure their events, reflecting on the old “party vibe” and moving away from the traditional opening format.

“Before COVID, there was always room for more and bigger,” said Marianne Boesky, thinking back to the days of mega-parties and big sit-down dinners at her eponymous gallery in Chelsea.

Since COVID, Boesky has hosted informal dinners for less than 30 people on the roof of the gallery, where people can come and go as they please. “They can escape if they need to or want to. It just creates a more thoughtful and intimate way to come together with people,” she said.

“If we do three smaller events around a vernissage, it’s so much better for the artist and for my team to be able to reconnect with people and to be able to talk, instead of one big celebration. But there’s there will be artists who will want that,” Boesky continued, echoing a sentiment expressed by many gallerists: vernissages, while conducive to networking and sales, are primarily meant to celebrate artists and give them a good time. . .

Across town on Bowery, Angela Westwater, co-founder of Sperone Westwater, has also moved from the traditional format of a grand opening reception from 5-7 p.m. to smaller private gatherings “with or without the wine – which I do not miss.”

Serving free wine – a common practice at gallery openings – has traditionally attracted cash-strapped students starting a night out, but it has also posed a problem for host galleries.

Iliya Fridman of the Fridman Gallery on Bowery said that before COVID, the gallery hosted receptions that drew crowds of 50 to 100 people. Since the start of the pandemic, the gallery has stopped serving wine to visitors.

“Before, there was a contingent of people who came just for the wine,” Fridman said. “Since we stopped serving, they don’t come.” He added that in addition to avoiding booze chasers, having fewer people in the gallery creates room for more personal conversations.

“Normally at openings it’s a big scrum where there’s a lot of people and it’s a little tight,” said Susan Swenson, co-owner of Pierogi Gallery in the Brooklyn neighborhood of Williamsburg.

Swenson said her gallery plans to start serving drinks again and create a more festive environment, but whenever an event approaches, she and her gallery partner feel like it’s not the right time just yet. .

“I think we’d love to get back to that, but we also like the more intimate setting when you have a small group of people you can talk to and have a glass of wine with,” Swenson said. (Breaking on tradition, the Brooklyn gallery started out serving vodka and pierogies, then beer.)

In August, the Transmitter Gallery in Bushwick held its first grand opening reception since the pandemic began.

“Before COVID, there could definitely be a party atmosphere at openings, which is consistent with the Bushwick art scene at the time,” said co-director Kate Greenberg. “Openings could attract some people who were clearly just to get a cheap or free drink, which would contribute to overcrowding and lingering too long, making it difficult for people to enter the space and see the show,” she continued. adding that its openings also drew crowds of students, making it difficult to tell whether people were old enough to be served.

However, Greenberg said artists can go to his openings and count on seeing old friends or making new ones. “In a way, the gallery has helped provide space for the community, which has been impacted by the pandemic,” she added.

Other gallery owners agreed that the nature and purpose of opening receptions has changed over the years.

“At first, we thought an exhibition opening was a watershed event where sales would be important in gauging the public’s reaction to the work,” said Margarite Almeida, co-owner of Westwood Gallery at Nolita. “We’ve learned over the years that really isn’t the case.”

For an upcoming opening in Westwood, Almeida said the level of interest was so high that the gallery decided to require RSVPs.

“We are trying to figure out, how far do we go in the protections? We don’t want superspreader events and COVID is still here,” she said, adding that the way forward is uncertain and it’s hard to determine the new normal with so little communication between people. galleries. This sentiment was echoed by other gallerists who spoke with Hyperallergic.

According to Jill Newhouse, who runs an art gallery on Manhattan’s Upper East Side, openings have become events for “more serious people.”

“The celebratory atmosphere turned into heartfelt responses to the art and the people who are genuinely happy to be there,” Newhouse said. “I can’t say that I sold anything to a new person who entered for the first time at a vernissage.”

“People were so incredibly happy to come together,” Newhouse described at a recent gallery opening. “There was a warmth and gratitude that I hadn’t necessarily noticed years before.”

Although reluctant to return to the old days of lavish receptions, Boesky said her gallery still welcomes gallery-goers.

“There’s always the next generation of interesting minds out there who go all out,” she said. “I want to give them access, listen and be part of the conversation.”

“The energy that is brought in energizes us – our team – and the artist who is on view,” Boesky added. “You don’t know if it’s a student drawing inspiration or something life changing from this event. It’s super important overall and we still need to engage with visitors in this way.

Can you get a debt consolidation loan with bad credit?