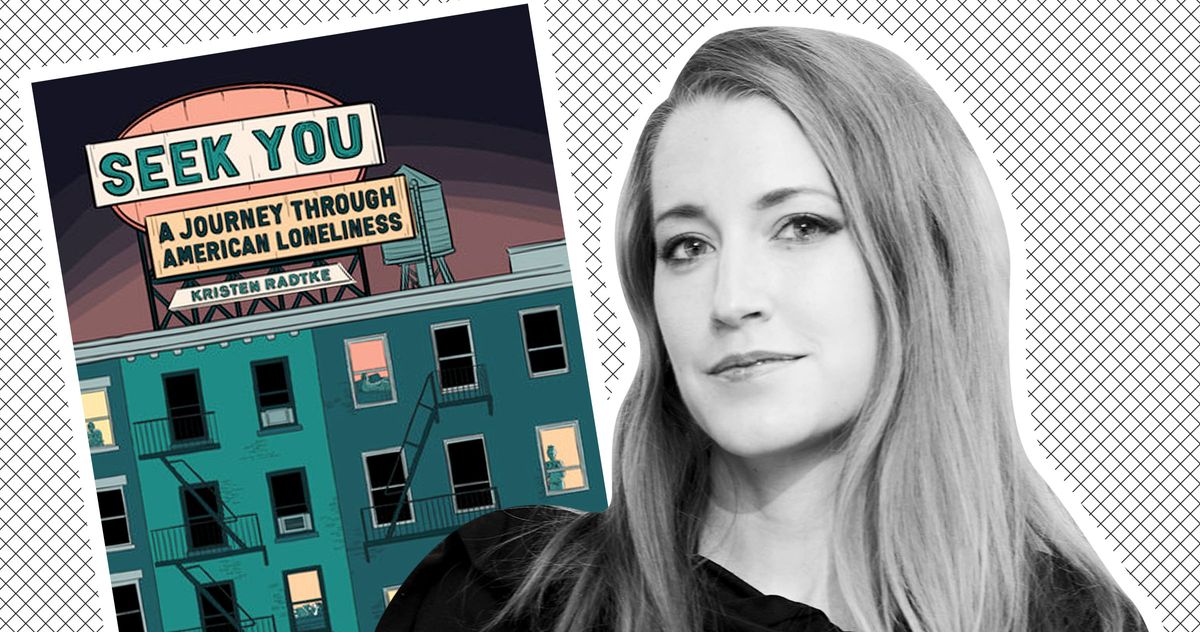 Loneliness, writes Kristen Radtke, is “a variance that lies in the space between the relationships you have and the relationships you want.” In his new graphic non-fiction book, Seek You: a journey through American solitude, the writer and illustrator – who is currently artistic director and deputy editor of Believer – makes loneliness in vivid colors. I’m looking for you began as a four-part graphic series exploring urban loneliness for The New Yorker‘s “Page Turner” – people taking a nap in the subway or working in isolated jobs – and extended to a book-length investigation of a tangled fog of a feeling so pervasive that it approaches classification as an epidemic.

The book has four sections: Listen, Look, Click and Touch. In these, Radtke explores the history of loneliness and its many expressions – internet chat rooms, sitcom laugh tracks, a 24/7 UK-based hotline for the elderly. alone, research by evolutionary biologists and psychologists and testimonies from her and her friends. There is even an analysis of pop culture – Radtke observes that we are taught to regard single female roles in romantic comedies as sad and the loneliness of contemporary male protagonists as sad. Crazy men Don Draper also significant, cinematographic even.

I’m looking for you feels especially enlightening as we begin to recalibrate our bodies to be close to each other again after a year of social distancing because it states an important truth: we don’t just want to be together, we need to be. The Cut explained to Radtke why loneliness is a biological wake-up call we can’t ignore, color is language, and how being hugged more can make you better at your job.

In the book, you draw a parallel between your father who used amateur radio in the 1960s as a child and you who used dial-up internet to access chat rooms in the 1990s, which suggests that every generation is living the life. solitude. It’s just something woven into the tapestry of human experience. Why is it now an emergency?

I don’t know the answer to that. What we do know is that loneliness has been increasing for decades. Epidemiologists believe that loneliness will be classified as an epidemic by 2030. There are several reasons for this that we know of. The first is that we live longer and therefore are more likely towards the end of our lives to find ourselves without a lot of people we have spent a lot of time with and love and who are gone. The second, related part is that we work longer and harder. There’s this real focus on production and our own success to the point that we don’t spend as much time building community as we used to. We have fewer children, we move more often. All of these factors add up.

I’m interested in whether or not the technology is attributable to this problem, because I think it’s an easy scapegoat. We often think to ourselves, “Social media is a mess. But I’m not sure if this is just a tool we use to implement the same issues we’ve always had or if it actually exacerbates the isolation issue. I think maybe we need more time to figure this out.

You also report that there is a unique strain of American loneliness integrated into America’s infrastructure and identity – the lone cowboy frontier myth, the art of Edward Hopper, and the abundance of “lone” mass shooters. Can you talk about it a bit?

Loneliness is kind of coded in America’s ideology. There is something about American individualism that seems very dangerous in terms of how we understand our relationship with each other. There is so much value placed on “doing it yourself” – and I’m not talking about silly projects around your house, I mean like getting it on your own. It’s so fundamental to the way we think about success and it’s a total fallacy. Since World War II in particular, we have really focused on space. America is so much about the great outdoors. We always put space between ourselves and another person as a measure of success, like “I can afford ‘X’ square footage” or that square footage in my yard. This is seen as an advantage when in reality we should live together more closely.

The reference photos for your drawings are taken from really interesting places, like for example the hashtag #selfie on Instagram, the famous photo series by Philip-Lorca diCorcia “Heads, “ and your personal street photography from public spaces like two people you saw on a Brooklyn window sill. How did you choose the visual language for this book and what would loneliness look like?

I don’t think I ever made a conscious decision. I never said, “This is the style of this book” or “This is what loneliness looks like to me.” It just got refined over time by the fact that I was drawing every day. The biggest challenge for me with this book was the color. I have never worked with color before, especially in a long term project. So I was really learning the language of color and recognizing that it is in fact a language. Color can communicate as much as shape. Moreover, these drawings are different from the standard comics. They are not sequential; they are not in the panels. It gave me some flexibility to describe things that weren’t narrative.

It’s like collages. I combine all of these different elements from my mind, but also from Google Images and the photos I take as I walk around Brooklyn. I’m going to put them on the side of where I’m drawing and start putting things together and imagining from there, which is one of the fun things about graphic non-fiction; you can literally show the research process in pictures.

I appreciate how you really dig into the science of loneliness. Tell me about “skin hunger”.

The science of loneliness is really what made this book the project I wanted to do. I didn’t expect to find out the things I learned, like the superficial gravity of loneliness in terms of what it does to our bodies. “Skin hunger” is a term scientists use to describe our human need for touch. I have spoken to a lot of touch therapists and they have explained to me how much we really need touch to survive. It creates a biological feeling in us that we are well, that we are safe and loved. This is one of the reasons the pandemic has been so difficult for many people, especially people who lived alone. In fact, we really need physical contact to be healthy. There are studies that show that if you hug someone for about 60 seconds in the morning, they will perform better at work. I hate to put it in those capitalist terms, but you feel better mentally and physically. It is also easier for you to fight off the infection if you have physical contact, not necessarily sexual, it can be purely platonic or maternal or paternal as well. There’s this whole industry that has grown around the need to touch people and they call it the hug industry.

Loneliness is like a biological alarm bell. It’s like being hungry or thirsty. Your body tells you that you need something. The challenge is to learn to listen to loneliness. We live in loneliness because in the grand scheme of human history, when we are alone, we are in trouble. We were more likely to be injured by a wild animal or something like that when we lived in caves and so we are supposed to feel panicked when we are alone because we have to be close to each other to protect ourselves.

Now we’re less likely to get stuck by a wolf than we were back when we were still evolving, but we spend a lot of time alone or isolated in some way and we still have those feelings, which build up in our body and become what is called hypervigilance. When you’re chronically alone for a long time, it creates a sort of paranoia or a sense of FOMO for a decade where you just think no one wants to hear from you. If you contact your friend, she won’t want to have lunch with you anyway, so you stop reaching out and isolate yourself. The real big challenge with feeling lonely is that you have to find a way to combat that cocooning impulse. You might feel the urge to withdraw more, and you really have to get past that because that’s how you enter this cycle of chronic loneliness.

You wrote something like “loneliness is the most universal feeling, but no one thinks that someone else experiences it”.

Exactly! And that’s what makes us feel so lonely. The pandemic was obviously an extremely lonely time, but it wasn’t the loneliest time of my life as there was a kind of solidarity in that loneliness. You know, the feeling that we were all in the same boat.


By submitting your email you agree to our terms and privacy notice and to receive emails from us.

Having Paradise Garden to yourself is, well, paradise

Our sustainable future began 60,000 years ago: finally, we’re catching up