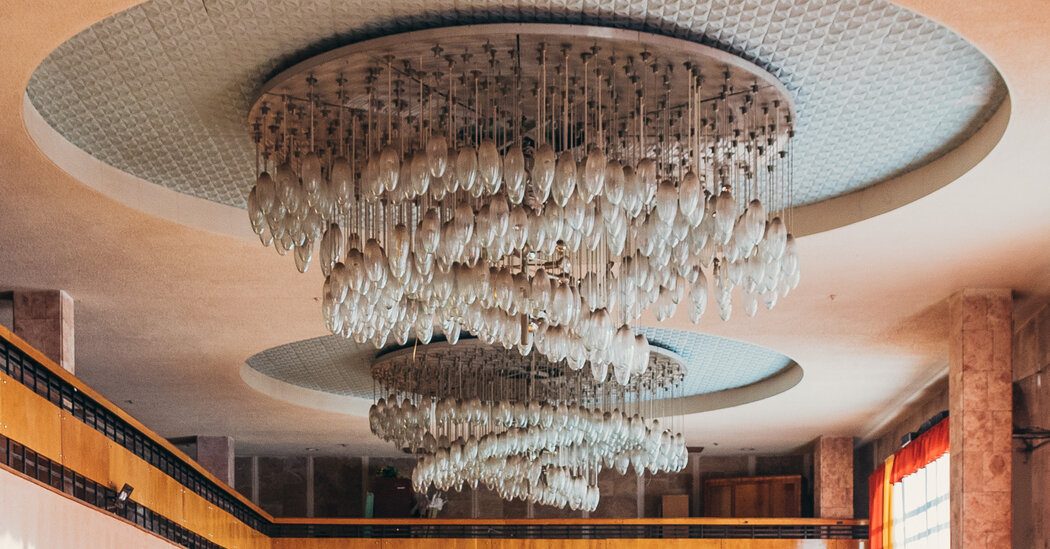 Social media gives us responses to the Russian invasion of Ukraine almost instantly, but some of the most moving responses I’ve seen come from young Ukrainian artists who managed to make new work documenting the events as they unfolded. as they unfold.

What follows are four accounts run by Ukrainian artists – one currently in Austria and three still in the country – and one by Ukrainian Americans, all working to keep the world’s attention on what’s happening on the ground.

The painter Ekaterina Lisovenko recently took up the Russian slogan “mozhem povtorit”, literally, “we can repeat,” which references the Soviet victory over the Nazis in World War II and was revived in hopes of convincing the Russian people that the war in Ukraine is an equally heroic undertaking. Lisovenko posted a single image four times. Captioned as “a raped and murdered woman and her murdered child”, the elongated, yellowish, slightly abstracted figures against a dark gray background are attributed to four different Russian invasions – the current one; the 2014 incursions into the Donbas region; the 2008 invasion of the Republic of Georgia; and the First Chechen War. It is a shocking and extremely effective way of reminding us of what is really at stake when it comes to sanctions, negotiations and troop movements.

For the past six or seven weeks, writer Asia Bazdyrieva has been keeping an online diary mostly in English from somewhere outside Kyiv. Published in white sans serif letters on a black background – like iPhone notes adjusted for low light – the journal captures the mind-bending dissonance of life in a war zone. One entry notes that Bazdyrieva slept for seven hours, delivered Molotov cocktails to the Territorial Defense Forces, and repotted a plant; another, which uses the phrase “Russian roulette”, is captioned “Cute felt might be deleted later”. The different tones are impossible to reconcile, and that is precisely what makes the diary so evocative.

Before the invasion, new media artist Andrey Rachinskiy and his long-time collaborator Daniil Revkovskiy produced photo and video work on the strangest corners of post-Soviet reality, as a fascinating investigation into the duel between graffiti pro-Russians and pro-Ukrainians in their hometown of Kharkiv. Now Rachinskiy is in Lviv, buying piles of food, diapers and medical supplies to send home — and heeding the piles with heartbreakingly beautiful photographs. His feed is also a good place to find some of the billboards Ukraine has erected for its invaders, like the one that tells them, “We’re on our land, but you’ll be there.”

Before the war, this popular account run by photographer and educator Dmytro Solovyov was dedicated to celebrating the sharp corners and huge chandeliers of Ukraine’s greatest 20th-century buildings. Now he chronicles their violent destruction, as well as raising funds for the preservation of cultural assets, like this stained glass window from the kyiv funicular — and promotes the architectural tours that Solovyov still conducts today. Unfortunately, images of bombed-out buildings are easy enough to find, but the context of Solovyov’s account makes it something slightly different. It not only adds to the record of airstrikes on apartment buildings and other civilian targets, no matter how important. He also found a way to imagine the most difficult to reckon with the cultural damage that comes with the loss of life and property.

How the war in Ukraine affects the cultural world

Valentin Silvestrov. Ukraine’s best-known living composer, Mr. Silvestrov made his way from his home in kyiv to Berlin, where he is now a refugee. In recent weeks, his comforting music has taken on new meaning for listeners in his war-torn country.

Paavo Jarvi. The Estonian American conductor was in Moscow, conducting rehearsals for an engagement with a Russian youth orchestra, when Russia began its attack on Ukraine. When he decided to stay there so as not to disappoint the players, many criticized his choice.

Alexei Ratmansky. The choreographer, who grew up in kyiv, was preparing a new ballet at the Bolshoi Theater in Moscow when the invasion began and immediately decided to leave Moscow. The ballet, whose premiere was set for March 30, has been postponed indefinitely.

In Memoriam: Life Trustee Anthony YC Yeh G’49, an innovator at the intersection of engineering and business