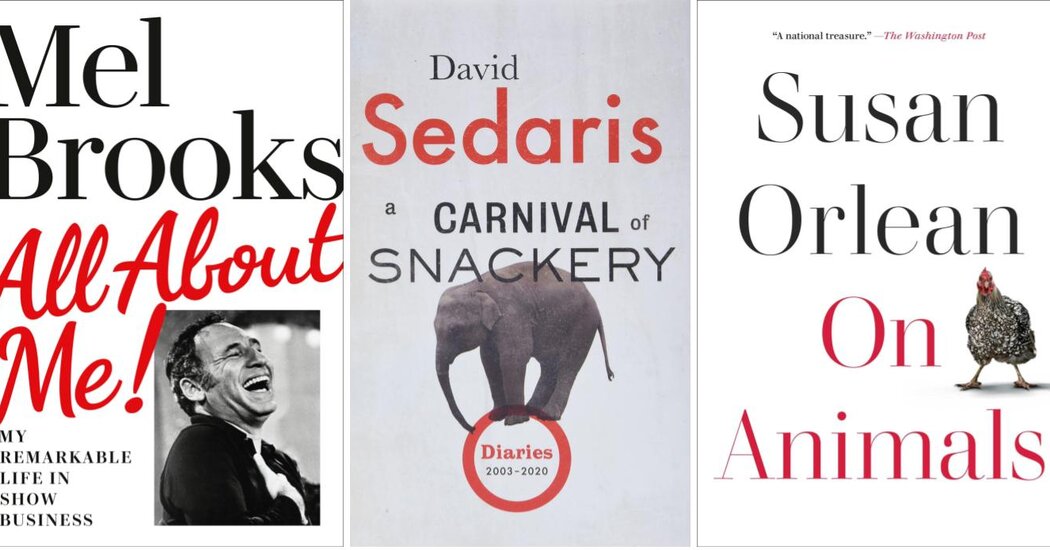 12 new books we recommend this week

THESE PRECIOUS DAYS: Testing, by Ann Patchett. (Harper / HarperCollins, $ 26.99.) In this excellent collection, the veteran novelist and bookseller explores her relationships with three father figures, a friendship that blossomed during the pandemic and her decision not to have children, among other topics; his frankness is a breath of fresh air. â€œThe days Patchett refers to are really precious, but his writing is anything but,â€ writes Alex Witchel in his review. â€œPatchett’s heart, intelligence and 40 years of craftsmanship create an economy that delivers his perfectly understated, emotionally complete stories. His writing style is gloriously his.

GARBO, by Robert Gottlieb. (Farrar, Straus and Giroux, $ 40.) The 19-year-old “bewildered, unsophisticated” when she arrived in Hollywood, writes Gottlieb in this richly detailed and scrupulous biography, Greta Garbo quickly became the most impenetrable of movie stars, even to her friends. “Once Garbo steps in front of the camera, Gottlieb’s book gloriously takes on its full meaning, a tour through a career offered by a shrewd, deeply insightful docent, brimming with knowledge and insight,” writes Mark Harris in his review . “He brings to his reviews a fan’s appreciation, a connoisseur’s acuteness, and an amused impatience with their aspects which are and always have been ridiculous.”

FIVE TUESDAYS IN WINTER, by Lily King. (Grove, $ 27.) As in his novels, many stories in King’s first collection of short fiction are preceded by loss and inflamed with desire. Readers are reminded that what we call coming of age does not happen in a single instant at age 14, but that part of being human is about continuing to discover new corners of being. In our time of anxiety and isolation, King writes stories to curl up in. “The pursuit of desire – the pride and folly of it, its connection to our intellect and the delicate synchronicity of brain and heart – is King’s best subject,” Megan O’Grady writes in her review. “King reminds us of the revelations that can still be found in the plot and the character, those elements of fiction that one could qualify as old-fashioned if it were not for the fact that she, with her range and her precision emotional, never makes them feel so. “

ABOUT ANIMALS, by Susan OrlÃ©ans. (Avid Reader, $ 28.) From show dogs to carrier pigeons, from stray turkeys to restless ducks, the Orleans Trials celebrate the full spectrum of the animal kingdom with an eye on the pathos of all creatures large and small. â€œThis emphasis on interdependence emerges not only from essay after essay, but also from the cumulative effect of the collection as a whole,â€ writes Margaret Renkl in her review. “Although Orleans does not openly enter the thorny field of animal rights debates, and although many of these trials predate widespread public recognition of the growing dangers of climate change and the decline in global biodiversity , what she understands of the human-animal relationship is fundamental to face these two calamities: the fact that we belong to each other. “

A SNACKERY CARNIVAL: Newspapers (2003-2020), by David Sedaris. (Small, brown, $ 32.) Like Sedaris’ beautifully crafted personal essays, his diary entries explore odd hairstyles, bland and aggressive interactions with post offices, airport bureaucracy, and non-sequences of gossip: micro-topics he raises their own foundation of sense and humor. â€œWhat sets Sedaris’s diaries apart from his essay collections is not that they are more intimate (more would not be possible) or that they show a different side of the author or his life, but that the collections themselves are longer. Time flies, â€writes Liana Finck in her review. â€œSomeone like Sedaris, who has such a knack for shedding light on little things, wouldn’t normally have to create a building. But the beauty of a journal is that it doesn’t have to be designed. He grows up on his own, while the columnist focuses on the human-scale (even microscopic) things that interest him.

SentinelOne (NYSE: S) margins are lagging, which may pose a risk for the future