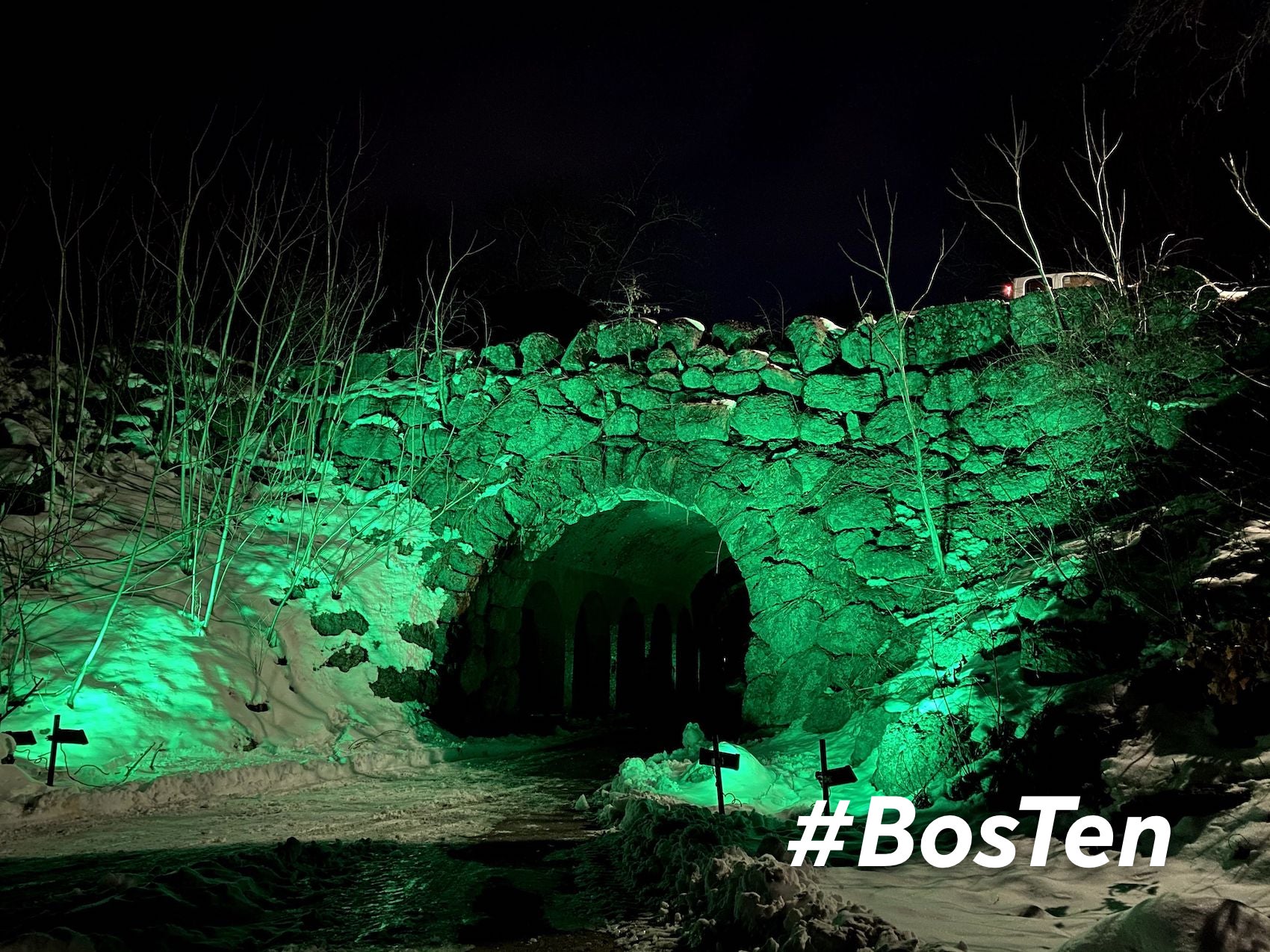 10 things to do in Boston this weekend

With more Massachusetts businesses and cultural institutions reinstating COVID-19 restrictions in the face of a resurgent coronavirus pandemic, residents may be torn about whether to venture out of their homes this weekend. end. With that in mind, this week’s BosTen features a mix of in-person and virtual things to do in Boston this weekend. Do you have an idea of ​​what we should cover? Leave us a comment on this article or in the BoTen Facebook Groupor email us at [email protected].

Follow the emerald glow to ‘Lights in the Necklace’

The Emerald Necklace Conservancy is once again lighting up Boston with its unique “Lights in the Necklace” exhibit, which returns February 1 through March 20. pm, celebrating the power of city parks to bring visitors together, as well as to inspire and light the way in these challenging times. Illuminated locations include Charlesgate Park trees on the Commonwealth Avenue Mall, Liff Park Bridges in the Back Bay Fens, Ellicott Arch in Franklin Park, a pair of bridges (Leverett Pond Footbridge and Wards Pond Footbridge) in the Olmstead Park and a trio of bridges (Chapel Street Footbridge, Bridle Footbridge and Longwood Avenue Bridge) in Riverway Park. For more information on the history of each bridge, a mobile tourist guide, and up-to-date details, see the Conservancy’s website. —Cheryl Fenton

Read more about “Plant-based food through the African Diaspora”

Dietician Christine Sinclair will give a virtual talk this Thursday at 6:30 p.m. on vegetarianism and veganism in cultural dishes. as part of a two-part event across the Boston Public Library. The event will be a “virtual celebration” of cultural foods across the African Diaspora as well as food-related health and wellness. The second part of this series will take place at the same time on February 7 and will be a “cook along” of the dishes covered in the webinar. Recipes discussed are from Bryant Terry’s “Vegan Soul Kitchen Fresh, Healthy and Creative African American Cuisine” and a shopping list will be provided during the webinar to help prepare for the culinary event. —Gwen Egan

french restaurant Rochambeau has a lovely downstairs cafe space in a busy part of Boylston Street – and they don’t keep it to themselves. Bright and early on the first Friday of every month through Spring 2022, Café at Rochambeau hosts local flavor tours with a series of pop-up chefs. This Friday from 6:30 a.m. to 9:30 a.m., Nicole Harington of the Catalyst Restaurant (Cambridge) will be on hand with a seasonal variety of baked goods and donuts. Treats are available while supplies last and events are walk-in only (no reservations). — Jacqueline Cain

Join the Boston Arts Academy in celebrating both today’s champions and yesterday’s iconic artists at its Champions Reception on the Commons at Roxbury Community College. On February 4, Governor Charlie Baker and Maristela Rapo of Giving The Glam, a nonprofit organization that provides incredible prom experiences for underserved urban and suburban high school students, will be on hand to receive this year’s BAA honors. During the reception, attendees will enjoy the premiere of BAAA Rocks! – a student performance full of inspired dance, music, theater, fashion and visual arts that celebrates Boston rock band legends (we’re looking at you, Aerosmith, Boston, The Cars). the BAAA Rocks! the show will stream online during a paid virtual show on February 5. To purchase tickets for the reception, email Caitlin Durkin at [email protected]. —Cheryl Fenton

Settle in for rope stretches at Natick

You could get away with saying that one thing Mike Dawes and Yasmin Williams have in common is that they play fingerstyle acoustic guitar. But there are so many more connections between them and their music, it’s no surprise they’re playing a doubleheader at the Natick Arts Center this Friday at 8 p.m. Each is a guitar master and each has a unique, rather unconventional approach. present instrumental works. Dawes, based in England, is known for playing both lead, rhythm, bass and percussion parts, strumming, picking, stomping on guitar wood and foot tapping. A native of Virginia, Williams plays his guitar the traditional way, but often brings in alternate chords or puts his guitar on his legs for a few taps, sometimes even using a small hammer to strike the strings. They’ll be playing two separate sets at TCAN, but rumor has it that at recent gigs they’ve taken to sharing the stage for a few numbers. —Ed Symkus

Enjoy “Rhythm, Rhyme, and Fix” at a BHM Poetry Slam

Join DiDi Delgado, one of the co-founders of Black Lives Matter Cambridge, for a slam poetry contest this Saturday at 7 p.m. to celebrate Black History Month. “40 Acres & A Slam: A Night of Rhythm, Rhyme & Fixes” is giving eight slam poets a chance to win up to $300. There will be three rounds of competition, with three finalists competing for cash prizes ranging from $75 to $300. All funds from the poetry slam go to 40 Acres & A School, a Delgado-led project that plans to buy, salvage and build an epicenter of black liberation in New England. Tickets are free, but there is a suggested donation of $10. — Marta Hill

Go cross-country skiing or snowshoeing with the syndics

With a snowy mix set to hit Massachusetts on Friday, planning an outdoor excursion for Saturday or Sunday may be the answer. Fortunately, the trustees offer both cross-country and snowshoe trails at a number of their properties, providing an invigorating form of exercise only available when the weather cooperates. If you don’t have the proper equipment, demo shoe rentals are available at Appleton Farms in Ipswich, Fruitlands Museum in Harvard, Notchview in Windsor and Rocky Woods in Medfield. For a full list of trail-rich properties and pricing options, visit the trustees website. —Kevin Slane

The punchy vocal styles of Winthrop native Gracie Curran have drawn enthusiastic comparisons with myriad masters of the human voice. Since assembling the High Falutin’ Band – which currently includes bassist Geoff Murfitt, guitarist Chris Hersch and drummer John Medeiros – in 2010, Curran and co. released two albums (2013’s ‘Proof of Love’ preceded ‘Come Undone’), won the 2014 Boston Music Award for Blues Artist of the Year, and served as the house band at Rum Boogie Café on Beale Street in Memphis. In 2015, Curran was named “Most Charismatic Entertainer” by New England newsletter The Blues Audience. So if you’re in need of a good soul soothing, or just a healthy dose of life affirmation, then get your tix for the February 6 show of Gracie Curran & the High Falutin’ Band at Bull Run now. And be sure to arrive early enough to catch the first set of “Boston’s Queen of the Blues”. Toni Lynn Washington. —Blake Maddux

Now in its second year, The Boston GlobeThe Black History Month Film Festival will feature a mix of new and classic films throughout the month of February to celebrate the culture, life and creativity of Black Americans. Interested viewers can visit the film festival website to respond to the virtual screenings, which will be available on demand ahead of a virtual panel discussion featuring World writers and editors, filmmakers and talents. This weekend, take in a home viewing of 2016 Best Picture Oscar winner “Moonlight,” then join the Globe on Mondays at 3 p.m. for a discussion with Harold Steward, Gary Bailey, Eugene Scott, and Nick St. Fleur. —Kevin Slane

The best events in town, delivered to your inbox